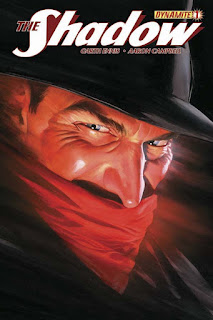 The past few years I've noticed that the comic world has been releasing more books from the classic Pulp genre into the market. Green Hornet has made his return to the comic world, as have The Rocketeer, Doc Savage, and a myriad of lesser known properties from Moonstone Books (Domino Lady, The Bat, The Spider, The Avenger, et al). Marvel got in on it with their Marvel Noir series and The Twelve, and of course Dark Horse's Hellboy has been doing battle against Lovecraftian Horrors with super-science for years. DC took a crack at it with the First Wave title, and they've arguably had the most prolific Pulp character consistently published, The Batman.
I am a big fan of the Pulp genre, probably stemming from repeated childhood viewings of Raiders of the Lost Ark, so the return of The Shadow to comics pleased me to no end. The Shadow is one of the oldest Pulp characters, first appearing in print in 1931 and since appearing pulps, comic strips, radio and television serials but had not had a solo title since the mid-nineties. Thankfully, Dynamite Entertainment saw fit to remedy that and premiered a brand new Shadow book penned by none other than Garth Ennis. Those familiar with Ennis' work may only be familiar with his more over the top books with gratuitous sex and violence, such as The Pro, his Nick Fury and Punisher Marvel MAX books, The Boys, and what is probably his magnum opus, Preacher. Ennis is also known for his fairly well-researched historical pieces like Battlefields, Enemy Ace, and, to a lesser degree, Adventures in the Rifle Brigade and Phantom Eagle. After reading the first issue of The Shadow, it just may prove to be a melange of Ennis' trademark violence and a period piece.
The book opens with an account of atrocities visited upon Chinese citizens by the Japanese during their occupation of mainland China from 1931 and 1945, and then turns to our titular character engaging in that tried and true Pulp adage: fighting goons against the nighttime backdrop of the dock district. I had high hopes for this book, and they were not dashed. Page seven shows us the first full reveal of The Shadow with cape and trenchcoat, wide-brimmed fedora, flowing red scarf, and twin .45s.
Enter gratuitous violence.
The remainder of the book shows us snippets of The Shadow's alter ego, Lamont Cranston, having lunch with some government officials regarding The Shadow's waterfront massacre and the bodies of Japanese intelligence agents found at the scene. We're finally shown another nighttime scene at Cranston's penthouse balcony with his female companion, Margo Lane. The exchange between the two shows us that Lane is entirely subordinate, submissive and potentially a feckless damsel in distress. Granted, this too is a tried and true Pulp adage, but I'd rather see a bit more chutzpah in our female lead. if nothing else their exchange provides us some insight into The Shadow's idiosyncrasies and shows us the potential he has to be a cackling madman, pouncing from the darkness with guns blazing.
The only flaw with this book (other than Margo Lane's poor introduction) is it seems entirely too short. It clocks in at around 22 pages, which is sadly about par for comics these days, but the pacing of the book makes it seem much shorter. It's essentially three acts of roughly seven pages each that pass so quickly you wonder where the book went. Aaron Campbell's art is very well suited here and ,combined with Carlos Lopez's colors, gives the reader a dark and murky landscape perfectly crafted for a Pulp/Noir story. I'll definitely keep this book on my pull list.
As a side note, the last four pages of the book are a preview of the 6th issue of Kirby: Genesis.
I hate hate hate this.
Evidently the Jack Kirby estate licensed some of his unpublished works, sketches and plot outlines, to Dynamite Entertainment and have let Kurt Busiek and Alex Ross run wild with them. I like the work of both Ross and Busiek, but I absolutely despise the practice of unearthing hidden works from artists and exploiting them under the pretense of letting the world see, for the first time anywhere, these forgotten gems.
Garbage. It's akin to Rick Ruben humping Johnny Cash's corpse in order to squeeze out a few more posthumous albums or shoehorning Bruce Lee into the last 20 minutes of Game of Death. Had this been Kirby's magnum opus, and had he tragically died mid-production, I could understand this book. However, the character designs look like rehashed Fourth World material and Alex Ross' artistry does not evoke Jack Kirby's dynamic Four Color style. It seems like a cheap pretense to cash in on King Kirby's legacy.
I'll be in my room, reading Destroyer Duck and old issues of Mister Miracle if you need me.


By: Will Dubbeld
Posted by The Hammond Comics Blog at 5:21 AM