Tales from the Yellow Pages.

I can’t help it.  I have some sort of fixation with Marvel’s What If…? books.  When I find them for cheap I can’t pass them up.  I’ve recently added two more to my collection of gems. 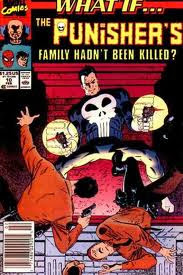 I’m sure anyone reading this is already familiar with the Punisher’s origins.  His family gets murdered after witnessing some super shady mob happenings.  Well, the first thing I noticed on the title page was that the sneaky bastards at Marvel had covertly added “In Central Park” to the end of the advertising title from the cover.

Frank Castle’s family survives that fateful day in the park and life is good.  But Frank Castle is destined to eat a shit sandwich no matter who is filling in his fluffy little thought bubbles.  Poor poor Frank.  Frank ends up joining the police force.
Franks partner turns out to be dirty.  Frank, being a “good” man, narcs his partner out to the captain.  Predictably the captain is a mob lackey and orders a hit on Frank.  Yep, Frank’s family is still gun downed by the mob, just not in the park.  Frank still becomes the Punisher.  The world still spins.

My favorite parts, and where I get my dollar’s worth, are the two half page panels of What If ..? spoofs

The Thing was an Elvis Presley impersonator?

What if……….Hawkeye used golf clubs instead of a bow and arrows?
I’d pay more then a Washington for that Thing comic.
I could see myself starting a cult and worshiping that book, so it’s probably a good thing I don’t own it. 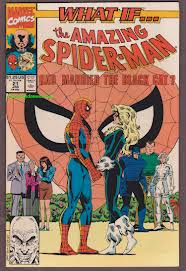 I snatched the Punisher “What if,” just for shits and giggles but I picked up this here tale of forbidden love because I was actually curious and I needed this arbitrary question answered.
Danny Fingeroth pretty much just paints Black Cat as some psycho jealous bitch.  Peter has been beatin’ down the bad guys while teamed up with Silver Sable and her wild pack.  Black Cat is not okay with this.  Then, Mary Jane sends Peter a birthday card and she continues to rage for a couple pages.

All in all both of these books were good for a few laughs. I’ve been squirreling away random back issues for the last couple of months, to get me through another Midwestern winter or the impending Zombie Apocalypse.

What the hell?  Why not?  Just another building block in my path to total enlightenment.
Posted by The Hammond Comics Blog at 6:54 PM No comments: