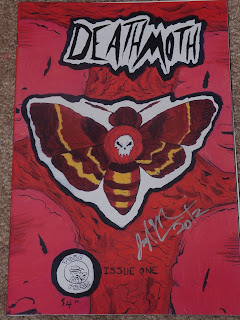 A couple of weeks ago our own Cody “Madman” Miller messaged me and asked me a question. “If I give you a comic book, will you promise to review it?” Never afraid of trying something new, I agreed very quickly. My expectation was a really off the wall comic, and I was determined to find something positive about it. Cody presented the comic to me this past weekend. The cover told me a lot about what I was in for.

The good news is I am still alive, but it was rocky for a minute. The urges of self-mutilation surfaced and threatened to inhibit my review writing capabilities.

The cover of this comic could only have been more effective if it was emblazoned with a biohazard symbol, although that would not keep everyone from opening it. Unfortunately the cover IS the best part and that is not saying much. It is mediocre at best. The death moth that has been drawn on the cover looks like the moth version of Nemo.

On the inside cover is the following statement:


"Warning!
This comic is not for children!
Viewer discretion is advised."

This is partially true. After reading the entire comic, “children” should be changed to “anyone”.

Death Moth is about Jack Hawksmoth, who happens to be a super hero. Anyway he gets murdered, goes to hell, and comes back for revenge . . . sound familiar? This guy even jacks the emblem of Spawn. HEY, TODD MCFARLANE WANTS HIS IDEA BACK! The story is really a shit sandwich. It is broken, hard to follow, and pointless. The writer obviously created this comic to publish his nasty minded filth, which he must view as creative.

Most solo independent comic creators who I have met or read are artistic and creative, so they need no one else to be part of the project. In the case of Death Moth, Joseph Morris needs to hire an artist, writer, and letter before publishing any more trash. The artwork is completely horrific. There is nothing well drawn here. After finishing the comic I had the urge to gouge out my eye balls, soak them in kerosene, ignite them, and overnight the ashes to Joseph.

The last point I need to make about this comic is Joseph’s focus. He has a crude and very, very disturbing fascination with penises. A description cannot be provided, because I have been violated enough already and refuse to regurgitate that crap. Trust me it is bad . . . very bad.

Cody “Madman” Miller can be expecting a groin punch in the near future followed by the return of this comic. Now I am going to curl up in a corner and cry. I may need therapy.
Posted by The Hammond Comics Blog at 7:30 PM No comments: 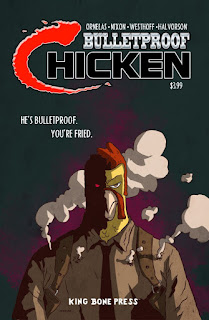 I decided to do a review of a back issue this time 'round the prickly pear, at least that was my intention. The plan was to review quite possibly my favorite comic in the whole of my funny book horde, Undead Zombie Biker Chickens From Hell and Other Tales #1 . . . yes. It doesn’t have the greatest artwork or the greatest writing, but the little bundle of awesome is wrapped in my favorite cover of all time. It does indeed have an undead zombie biker chicken from Hell perched majestically atop his chopper complete with wheels o’ fire. Just picture the Ghost Rider but with a flaming chicken skull complete with that little red flappy thing that chickens have . . . it’s a gottdamn thing of beauty.

So anyway, I dug my ol' friend out of the short box that contains my most prized comics and that’s when I remembered I had purchased another chicken comic at a con a while back and hadn't gotten around to reading yet.
Poof! Enter Bulletproof Chicken.

Bulletproof and his partner are on the case of the Cluck Twins. BP doesn’t let people do bad shit in his city and live to talk about it. He’s been doing this for years. It’s just another day for the cock with a glock. Today would be different . . . sold. 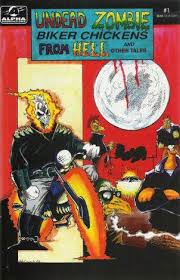 This adventure starts with Bulletproof Chicken chicken-kicking his way through the wall of a restaurant while dropping a plethora of F-bombs. Shortly thereafter (one panel to be exact), BP and his partner Ed engage the evil lizard men behind the counter in a gun battle of epic proportions. Now, during this fight there is a guy in the background happily eating a chicken leg. At first I just thought this was meant to be some kind of corny ironic chicken nod. It turns out it kinda was because after all the Cluck Twin’s lizard lackeys are all dead, BP chicken-kicks a door in and there is Lisa, his hen, tied to a chair her left leg nothing but a bloody nub. That’s right, the Cluck Twin’s evil lizard lackeys fried it up and served it to the previously mentioned guy in the background. Kirkman, eat your heart out. That’s some demented shit.

Now enraged, BP puts on his mean face and chicken-kicks in another door (obviously his preferred method of dramatic entry) and faces off with one of the Cluck Twins. Bulletproof ends up blasting a cap in the evil doers face, but as it turns out Bulletproof isn’t so bulletproof and he is slain.

Fast forward 8 years into the future and Ed, BP’s old partner, is married with children to BP’s ex-wife (who now sports a robotic chicken leg). Ed gets a phone call from his old chief of police and is called in to inspect a crime scene. The scene is mass carnage with dead lizard dudes all hacked up and mutilated. Ed leaves the scene and shortly (2 panels to be exact) is busting in a room and there sits the Cluck Twin that was not shot 8 years earlier. As it turns out Ed and this Cluck Twin were in cahoots. The twin wanted his brother out of the picture and apparently Ed had a thing for BP’s wife. The two planned the whole attack 8 years earlier.
Bastards.

Shortly after Ed leaves (3 panels to be exact) he turns around and goes back in the Cluck’s office. He returns to find dead lizard lackeys and the evil Cluck Twin dead. The Cluck has a knife protruding from his forehead with a Business card from the restaurant where Bulletproof was killed. Ed rushes home but finds his hen and chicks murdered. With nothing to lose Ed heads to the aforementioned restaurant. Once inside Ed is confronted by the Cluck Twin who had been murdered 8 years prior in this very establishment. After the brief flash back ( 2.5 pages to be exact) explains that the Cluck had bionic part implants to cheat his way out of death. He explains how he also saved Bulletproof in the same manner. His plan was to control BP and make him do his bidding. Not long after this revelation (5 panels to be exact) as if on cue...BP crashes through the door again except this time he looks exactly like Robocop with a beak and robo-chicken legs. Then we are blessed with watching Robo-Bulletproof Chicken kill every living thing in the building (6 pages to be exact).
The End.

So, I confess, I was entertained. The story and characters were hilarious. I never take life to seriously. I will say the artwork could have been a bit more detailed. It was pretty bland in parts and came off as rushed and sloppy, but not to the point it hurt my eye holes. If given the chance I’d buy the 2nd issue in a heartbeat (7 heartbeats to be exact). Bulletproof Chicken now has a home in the mythical short box of awesome right next to Undead Zombie Biker Chickens From Hell. I guess I’ll need to make an official chicken section divider now . . . know what I mean Vern?
Posted by The Hammond Comics Blog at 11:00 PM No comments: 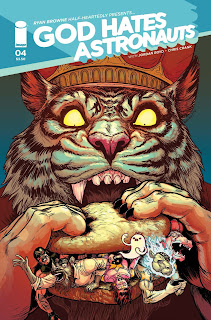 Ladies and gentlemen, boys and girls, mollusks and Protozoa, if you're unfamiliar with the work of Ryan Browne you're doing yourself and the world of comics a disservice. Browne has worked on Bedlam, The Manhattan Projects, Smoke & Mirrors and various other sundry books. His penultimate funnybook is God Hates Astronauts. From its humble beginnings as a DIY indie book, GHA has steamrolled it's way to Image Comics and is now on Volume 2.
I hear it outsells The Walking Dead.
That's a complete lie. I've never heard that.

In the past, the Hammond Comics Blog has wrangled Ryan Browne and squeezed an interview or two out of him (found in our interview archive), and we figured it was about time for another 7 Questions with Ryan Browne.
So without much further ado about nothing:

Hammond Comics Blog Question #1: If God Hates Astronauts was ice cream, what flavor would it be?

HCB Question #2: Do you prefer to comic book sober or buzzed on adult beverages?
Read more »
Posted by The Hammond Comics Blog at 10:32 AM No comments: