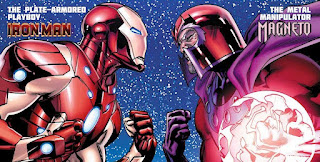 When I first heard about this fight I was interested. Not because I’m a huge fan of Iron Man or Magneto, but because it is Iron Man vs. Magneto. Like most people, the first thought was…..How in the hell is this even a fight? I knew Stark would bring the tech but would it be enough? As it turns out, Iron Man should really be named Carbon Nanotube Man. That’s too bad. Part of me wanted to see Magneto crush Iron Man like a tin can. As long as it’s well done I wouldn’t mind at all. Sadly, all fate handed me was Magneto dropping a utopia tower on him. Iron Man countered with a neodymium super magnet swarm. Epic fail.
The fight moves into space. Stark uses his satellites to blast Magneto. The two bash it out a few more times than it seemed Magneto realized that their battle was really nothing when compared to the bigger battle to come….. He just kind of gave up. Avengers 1 X-Men 0 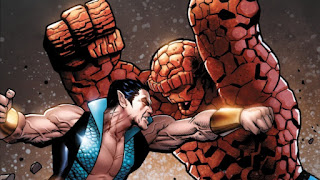 I was a little less excited for this one. Again, the only reason I even cared at all was because of the fact that I really hate Namor. I’ve never been nor will I ever be on the Namor band wagon. I can’t say the same about the Thing. I own quite a few books with the Thing in it; my favorite being the old Marvel two-in-ones I have.
This time I got my way. Thing thrashes Namor so bad that Aquaman felt it. The best Namor could come up with was a giant fish. Fail.
Kathryn Immonen did a great job with the dialogue. The Thing made me laugh out loud a few times. No “Its clobberin’ time” however. What gives? Avengers 2 X-Men 0
If you’ve bought in to the entity that is AvX then this mini is a must have. If you just like to see A-listers bloody each others noses, then this is also a must have for you. If I were you I’d buy it to read Thing trash talk to Namor.
On a different note, don’t forget Saturday is National Free Comic Day. Stop in at your local shop to pick one up. Save Friday for the Avengers movie.

Posted by The Hammond Comics Blog at 6:26 PM