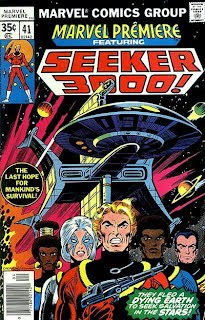 Every year for Free Comic Book Day, the shop I frequent (Books, Comics, and Things in Fort Wayne Indiana plugplug) has additional sales and promos which will unfailingly draw me in. This year BCT had 4-5 longboxes set out that you could paw through hoping to find some hidden gem. I found some decent freebies after sifting through an inordinate amount of Image and Valiant detritus such as a few issues of Marvel's 70s Red Sonja series, Marvel Fanfare, some DC books reprinting Ra's al Ghul stories from Batman, and this lonely issue of Marvel Premiere. Marvel Premiere was one of the many spotlight books the company had in the 70s & 80s that was intended as a pilot of sorts for stories and characters that didn't merit their own solo books, but might someday if enough fans supported the story. Adam Warlock had a feature, as did Dr. Strange and Iron Fist. So did characters like Paladin, Woodgod, and the Legion of Monsters, so it's kind of a crapshoot. The kind I will always roll the dice on.

So, when the lonely issue of Marvel Premiere batted it's orphaned eyes at me on that fateful day I couldn't resist. Okay, I thought this might be a turd when I picked it up. The cover seduced me. A 70s sci fi starscape with what appears to be two starship Enterprises crammed together to make one giant starship Enterprise was the first thing I saw. Second, the title reading 'Marvel Comics Group Marvel Premiere featuring Seeker 3000! (exclamation theirs) Third, the cover was credited to Dave Cockrum and Joe Sinnott.

Upon reading, I was not surprised to find this comic did not become a mega-hit. Or any hit. Our premise is fairly formulaic science fiction fare, telling us the tale of a far flung future where our sun is going to go supernova and destroy mankind. The Seeker 3000! (exclamation mine) is a ship that The Six, who are Earth's autocratic rulers, have constructed to carry cell samples of all their minions and sycophants to a new solar system, settle a new habitable world, and clone the selected populace of Earth. The crew of the Seeker 3000! (I'll stop now...) is introduced and they too are fairly archetypical of the genre. We've twins of African descent, one male, one female, who serve as "solar engineer, physicist, and second in command...terraformist, life-scientist, cryonics and cloning engineer", a host of nameless, faceless background crewmen, and a "behavioral scientist, medic and stress-psychologist" who I can only assume is native American due to the fact that he is inked with a reddish hue and is named John Bear. Our captain is, of course, a square jawed blond white boy.


Captain Jordan Shaw, our aforementioned Aryan captain, reveals The Six's sinister plan to repopulate mankind's new home with puppets of their own choosing and offers instead to rebel and repopulate mankind's new home with people he has chosen instead. From a random sampling of scientists, philosophers, humanitarians, Playboy bunnies and heavy metal rock musicians*.The crew agrees with a resounding "Go!" and we're off to rescue a telepathic, precognitive telekinetic mutant that will serve to power the Seeker 3000s warp drive. Unfortunately our heroes are dogged at every turn by The Six's Prime Servant, Jason.
That's right, the primary antagonist of the story is just some fella named Jason. Tremble, mortals, tremble...
Unsurprisingly, our heroes rescue the mutant (who turns out to be a hot chick), power up the Seeker 3000, escape the clutches of the evil Jason, and blast off!


Jason gets the last laugh, as he programmed the ships computer to have his personality. It won't rebel or anything, we're assured, it'll just have the personality of a priggish dead villain.
Way to stick it to 'em, Jason.


So, we warp off to find new life, new civilizations, and boldly never be seen in a comic book again. This whole book seemed like a filler story from an anthology series. Moench has done MUCH better work on things like Master of Kung Fu and Deathlok, and Sutton does good work, but check out some of his other horror or sci fi art. It was free, a hokey, fun read, and I've paid real money for garbage Jeph Loeb has written, so I can't really bitch too much.


But I wouldn't recommend you buy this unless your a collector of the writer or artists. Or you really like bad science fiction. Honesty, they all but admit that this is a Star Trek rip off in one of the editorials in the book which states that they've always been disappointed that the comic book right for Star Trek have been held by another company, so they made Seeker 3000.
As an interesting postscript, Seeker 3000 was apparently revived in a late 90s miniseries as part of an attempt by Marvel to introduce a science fiction line of comics. I'm morbidly curious as to how this miniseries is, but I don't believe I'll be paying any money for it.
I'm hoping it'll be in a longbox, next year on Free Comic Book Day.

Posted by The Hammond Comics Blog at 3:34 PM