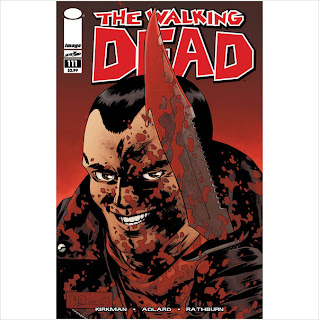 Almost ten years of The Walking Dead and we find ourselves on issue #111. As a fan that has been with this book since the very beginning I can say...this book is now garbage. Line your cat boxes with it's pages, The Walking Dead is now one of the worst comics money can buy. One of the most realistic zombie/human dramadies of our time now has tigers that obey commands, a George Clinton doppelganger who speaks olde English, and the Governor 2.

If you read TWD today, great arcs like Fear the Hunters are long gone. The worst part is that everyone I know is still reading, including myself. We buy this book now out of habit because it used to blow our hair back like nothing else. Now it is another example of a successful television show ruining the source material, an uber successful writer resting on his laurels, and a plot spun out of control that has jumped the shark about thirty times since the one hundredth issue hit comic store shelves.

The worst part about this book is how insanely slow the plot moves. Nothing will happen for six months, followed by one action packed issue. Kirkman defends this in Letter Hacks by saying that his predictable formula of 6 parts boredom/1 part action is a staple of the book, when every fan I know just wants to see something interesting. Developing characters doesn't necessary mean boredom. BKV and Fiona Staples do a great job of this with Saga.

Neegan is a cheap imitation of the Governor. The only discernible difference between the two characters at this point is that he is openly sadistic, while the Governor used a bit of subterfuge in order to appear to be a benevolent leader. The way they exercise control over their societies differs greatly.Neegan's twisted sense of morality is put on full display in #111. It is one of the better single issues to come out in sometime admittedly, but that's not saying a lot. Even #111 is well below average, and it's clear at this point that we're dealing with a creative team that's trying to squeeze every nickel out of every arc through boring, flaccid storytelling. Kirkman says that the tiger and the master of funk are an example of "how far the world is gone". It's more of an example of how far detached Kirkman is from his hardcore fan base than anything else.

And while the hardcore fans hope and pray that this book could once again become great, our hopes dwindle more and more each month. TWD is filled with insanely predictable storytelling tropes including the pace of the book, one issue out of six being action packed, and the inevitable death of a long time character being a major event. What made this book great in the past was that it would continually surprise the reader. It was a gritty, raw, and realistic tale of humanity surviving in one of the most terrible landscapes imaginable. Characters like Jesus, George Clinton, Neegan, and the tiger do not come close to replacing characters like Glenn and Abraham. The release of this book used to be the highlight of my week, now it is the last thing that I read on my pull list. TWD is two bad arcs away from getting removed completely. This is something that I would have thought unthinkable a year ago. Smarten up guys, you're almost out of compelling source material for your television show.

Posted by The Hammond Comics Blog at 9:05 PM No comments:

Comics Cubed, my dealer of choice in all things funny book, promoted this book pretty heavily. Gavin Smith, the man behind the fancy drawings, is a local cat. On May 4th (that’s free comic book day for those not in the know) Gavin had a table set up with his own comic, Human City, and a preview of this here book. I ordered up a copy and promptly forgot about it. It was a nice surprise when it suddenly appeared in my stack of books.

The book opens up by throwing us in the midst of a battle to the death between a Redcoat and a conquistador, an old school Tommy Gun wielding gangster, a medieval knight, a German storm trooper and a caveman, a Roman centurion, cowboy, and the last and the lamest: A Mayan warrior and a professor. The year is 2040 something, for the moment. In Porto’s future everyone has personal time traveling devices and these people from the future seem to pass the time kidnapping combatants from various times throughout history and forcing them to participate in gruesome gladiator style battles to the death.
I know what you are thinking...meh....time travel. But hey, it’s not like that, at least not yet. Just as the Mayan buries his spear in the professor...
Krakooom !!!!

We’re in 1970 and we meet Alexa just as she arrives there from the 1960s. Alexa was working on a research project in the field of…wait for it…wait for it…time travel. Seconds after Alexa beams in a uniformed soldier named Bertram beams in to the scene.
Bertram is an ass. Bertram sees time travel as some ultimate evil and he intends to destroy the time machines (which look like blue donuts) and “take care” of anyone involved in the experiments. Alexa is the last of her research team left alive.
Alexa does the time warp again and lands in 1978, Bertram follows. She runs again and lands in 1991, Bertram follows. As Alexa continues to run she runs into a teen, Spatz, and he is time jumped with Alexa to 2012. The evil Bertram, we learn is actually Alexa’s husband. Bertram and Alexa engage their own battle to the death and in the process both Alexa and her blue time donut are destroyed. Spatz and Berty, in an attempt to escape the police officers now chasing them, time jump together once more. 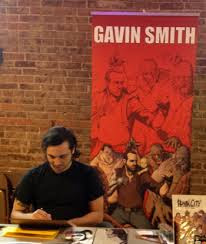 2040’s again. The last page reveals the two being tazered and snatched up, presumably being taken to the arena.
The story is actually really entertaining. The heavy time travel comes off really well and wasn’t that lame actually.
The art was awesome. As he did with his work with Human City, Gavin is a master of human expression. The backgrounds are stunning. The scenery changed when the characters are time warping and it was extremely well done.

It wasn’t until I started writing this review that I noticed Walt Flanagan from the television program Comic Book Men did the cover work. I have to say, it’s a pretty bad ass cover. High five Walt.

It was the same kind of deal when I was flipping through the issue one last time that I noticed the cameos in the crowd scenes. I won’t say who it is in case you are inclined to solve this mystery all by yourself. All in all, a good read with a fresh new look into the time travel genre, throw in some killer art work and...

Posted by The Hammond Comics Blog at 8:28 PM No comments: