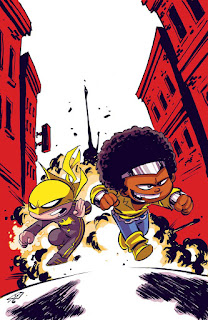 I’m sure most comic book fans have at least read one(probably more) comic involving Luke Cage or Iron Fist, and chances are good that they were defending their comicdom tag-team heavyweight championship belts. As far as team ups go you’d be hard pressed to find a more capable and iconic super-duo. They’re right up there with pb&j . . . lasting. I enjoyed many a Power Man and Iron Fist in my youth, so pulling this book was a no brainer. I’m more of an Iron Fist fan than a passenger on the Luke Cage (he doesn’t like to be called Power Man for some reason, so we’ll respect that) bandwagon. I guess in my mind I’d rather have a super, glowing, kung fu grip then unbreakable skin and no neck. Hadouken!!!

All in all, a great first issue. Throughout the whole book Cage keeps adamantly reassuring everyone who asks if the Heroes for Hire are back in business that they are not. Obviously Cage is full of shit and I’m so happy he is.


Highlights in no particular order are; the boys get in a scrap with Tombstone and his merry crew over a magical necklace, Jessica Jones, Black Mariah. The dialogue was very “Tarantino” with a dab of “Seinfeld”. Huge fan of Greene's artwork in this book, with the exception of Tombstone . . . definitely the worst interpretation of Tombstone ever. 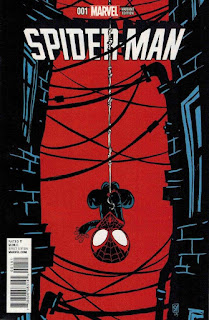 I was among the mob of torch-wielding True Believers cued up to burn the Ultimate lines’ bridge when Marvel killed the Ultimate Peter Parker. I was weaned on Late-80s Spider-Man (In my eyes the classic Spider-Man.) so, believe you me, even though it was just “the other Spider-Man” I wanted none of it. It was personal. THEN! They wanted me to accept this new guy Miles as a “better option” than PBP?!!! Hell no. Not happening. I wanted no part of this Ultimate business anymore…ever. So of course I bought every issue of Ultimate Spider-Man and of the next incarnation Miles Morales: Spider-Man. I couldn’t stop really, it was that good. Bendis and artist Sara Pichelli were killing it with Miles. I was genuinely worried for him following the Spider-Verse/Secret Wars mess. Marvel had a stable full of new Spider-Toys, so would Miles unceremoniously ride off into the proverbial sunset? Obviously not, because here we are.

I must say this first issue continued the precedent of righteousness and doesn’t disappoint as Miles struggles with life as his double identity starts to catch up with him.


Highlights include: Shocker, Kangaroo, and Blackheart beat down the Avengers, Miles picks up Caps shield and beats Blackheart straight back to Hell, Blackheart promises he’ll be back, and as usual the Skottie Young variant cover is fantastic.
Posted by The Hammond Comics Blog at 11:22 AM