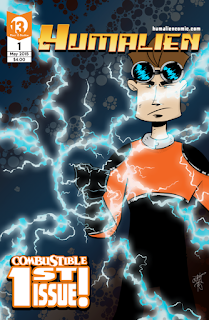 Because preordering 20 lbs of comics weekly isn't enough, I'll always browse the newsstand at my LCS (Books, Comics, and Things in Ft. Wayne, IN plug plug plug). A trip or two ago I spied the first 3 issues of a book called Humalien.

"Dafuq is this?” I asked the clerk, intrigued by the Saturday Morning Cartoon cover art.

He'd not read the book, and told me "some guy brought it in and asked if we would put it on the shelf."

I'm paraphrasing here, but that's pretty much how it went down. A bold Indie creator hawking his nerd-wares door-to-door at all comic shops in his path, or that's how I imagined it, anyway.

I initially passed on the comic, wandering around and hoping I'd spy some hidden back issue gem or discounted tpb. As I readied myself for checkout I thought, "Ah, screw it. Imma buy this guy's Indie book."


BECAUSE YOU HAVE TO SUPPORT INDIE BOOKS. 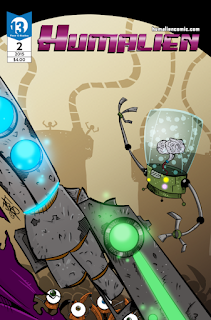 I grabbed all 3 issues, briefly paged through 'em, and home we went.

Cracking issue 1 immediately introduces our hero, an electrokinetic young man named Ed and the first page tells you he pretty well fits the Brash Youth mold we all know and love. He tussles with some robots that reminded me of a less-beakey version of the flying Bio-Dredd from Captain Power and the Soldiers of the Future, and we're off to the races.

Ed is rescued by a roguish alien named Plato and one robot-smashing escape later we start to get a feel for the book's direction. Ed is a cloned human created by three Evil Overlords called The Trinity for what I can only presume to be Nefarious Intentions. Ed was liberated from his cloning tank by a resistance of some sorts whose members, aside from Plato, include a Nervous Little Sidekick fellow named Kuhl and a gunslinging Sexy Purple Alien Girl.
The Trinity doesn't let this slide and sends a mysterious tough guy called The Executioner to collect Ed. The next couple issues detail Ed's rescue from The Trinity's cloning lab, a great robot fight or two, and the introduction of Wyl, who fills our Grizzled Old Badass role. Issue 3 confoundingly left me with a cliffhanger, but the ride there is worth it.

Humalien is almost the perfect science fiction comic. It certainly isn't pretentious, hitting all the beats you would expect from a sci-fi book, and certainly isn't shy about embracing the genre archetypes. It reads like episodes of a 22-minute television show, making for an almost too-quick read, but maintains a steady cadence from issue to issue. It's very Star Warsy in the way we're rooting for a small, scrappy band of outlaws tear-assing around and sticking it to The Man whilst shooting laser guns and cracking wise. This is in no way a detriment and frankly is a breath of fresh air in a world of mega-events, pretentious highbrow comics, and the slowly creeping return of gritty '90s-style books.

Farster's art is, as previously mentioned, Saturday Morning Cartoony and reminded me quite a bit of Genndy Tartakovsky or perhaps Jhonen Vasquez art. There isn't really a comic art style that equates. J. Adam isn't trying for a photo-realistic book or aping Jim Lee's hyper-detailed work, he's drawing a damn funnybook and oughtta be proud.

Issues 1-3 are available from humaliencomic.com and the best way to ensure an issue 4 is to buy this book. Indie comics cost dollar bills and usually creators can only afford to squeak out 1, maybe 2 books annually. Projects like this need readership support and the support of brick-and-mortar shops. Ask your LCS real nice, and perhaps they'll order some copies for the newsstand.
I'll be waiting.
Posted by The Hammond Comics Blog at 6:23 AM