REVIEW: Archie vs Predator #1 of 4 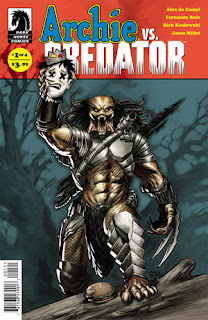 I recently made the comment that nothing good is coming out of Dark Horse comics. Archie vs. Predator seems to steer that comment into slightly wrong territory. It was by chance I even laid eyes on this comic while at my LCBS, Comics Cubed. I was in a rush to get my other errands done and get back in time to pick up my child from school. The awesome cover of this issue drawn by Eric Powell just stopped me. The Predator was drawn well, holding the decapitated head of Jughead and standing over a burger.

You have to understand my stance on the Riverdale gang. When I was a child my interest in comics began with Fantastic Four and Star Wars. Unfortunately, my ass of a father took that as me wanting to read Archie like he had for years and dumped bunches on me. For a while my comic interest died in Riverdale. Until I was older and buying my own comics, the thought of purchasing an Archie comic just about made me puke, but the thought of Predator tearing through the Riverdale gang just lit me up inside.

I have to hand it to Alex de Campi; she has done a great job on the story thus far. A stage for maximum carnage has been set without trampling on preexisting work. At the start of the book the whole Riverdale gang is trying to decide how to spend their Spring Break, such a horrible dilemma for these troubled eternal teenagers. Cheryl and her brother Jason brag about yachting in the Caribbean, and about that moment Jughead tears a bag of chips open and wins a trip to a tropical beach paradise for all. What a setting for some prey to go and get hunted, right? Nope. I will not spoil that twist for you, but let me just say that this is not going to be a jungle or urban hunting ground.

This book was enjoyable and a couple of panels made me laugh, but the real enjoyment came from the bright, colorful artwork. Ruiz, Koslowski, and Millet intertwine their talents well. The thermal imaging artistry was done fairly well, and it was nice to see that the Predator could not pick whether he thought Betty or Veronica was prettier.

The following will be said without spoiling the comic: I think it was dumb on pages 19 and 20 that the Predator has made two kills and strung up over the group, and even though blood is dripping on them none of the gang looks up or mentions it at all. That is just unbelievable even in the world of make-believe. The dripping blood should have been left out completely. 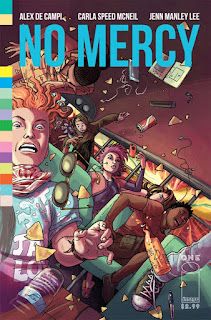 My firm philosophy of comic books is the writer is the backbone of the comic. Artwork can be perfect and spectacular, but without a good story and direction, no one will be interested. De Campi is doing a great job lately. Last week No Mercy #1 (Image) really enthralled me with the story setup. Before these two issues came out Alex de Campi was unknown to me, but this is one writer to watch. She has a very attractive website at www.alexdecampi.com.

Archie vs. Predator will be a mini-series I am going to have to follow. My hope is that the great hunter thins the herd in Riverdale. The only ones I hope survive are Jughead, Reggie, and Betty. That’s right! I am a Betty man. Veronica is just too full of herself. I just hope Predator is not vulnerable to dramatics and teenage whining.

Posted by The Hammond Comics Blog at 11:05 AM No comments: 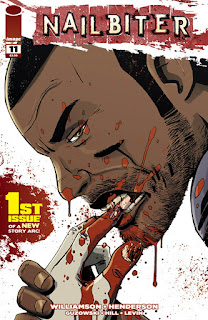 This book came out of nowhere. One fateful day it just randomly appeared in my folder at the local comic shop. Art Bee reviewed this book awhile ago and he liked it. The guy on the cover was chewing the fingernails off a severed hand, and the fact it was the first issue of a new story arc were the three selling points that kept me from putting this one back on the shelf.

As it turns out it was a good decision. I really dug Williamson’s writing. He does a great job of going almost too far, but then not. There were a few times I was stared at a page wondering what the hell I was doing reading this comic, that’s for sure. Serial killer books are usually not my forte. There’s no doubt that if you don’t prefer your comics saturated with profanity and gratuitous gore you will want to pass on this title because that is exactly what we have here.

Mike Henderson’s art was freaking fantastic and his page layouts are my favorite. Every page has a unique layout, from the two page spread of 2x2 panels depicting the WTF Killer hacking up some poor old bastard into tiny parts with a cleaver and Nailbiter professing his love for murdering and eating people, to the three panel page of The Butcher of Buckaroo dragging Barker into the darkness.

You see. The deal here is a shit-ton of serial killers come from the same small town in Oregon, and “The Fuzz” is here to find out why and lay down some law. That’s pretty much it except for the bat shit crazy stuff that happens cover to cover. The phrases “uncomfortable joyous nightmare” and “I just threw up in my mouth but it’s fine” best describe my Nailbiter experience.

Like I said before this isn’t my usual type of funnybook, but these fellas have all the bases covered and are forcing Nailbiter into a permanent spot on my pull list. I need to know more. I’m going to have to pick up the first trades and catch up because having just read this single issue I’m admittedly lost as to what the hell is actually going down and who the hell any of these people are.

Posted by The Hammond Comics Blog at 11:03 AM No comments: 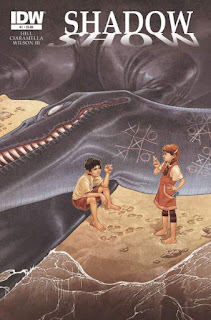 There are moments in comics that make them transcend any other medium. In the past there have been great adaptations of literary works and Shadow Show is a five issue mini-series that pays homage to the science fiction heavyweight, Ray Bradbury. It includes works from Harlan Ellison and Neil Gaiman, amongst others, and each issue is filled with dense introductions and epilogues. All five issues make you wish that this title from IDW had a spot on your monthly pull list, but perchance to dream.

Issue one was by far the weakest, but after that there were no more qualms, and no reservations whatsoever. As an avid Ray Bradbury fan, these books did a great writer justice. It was great to see such iconic prose in fresh context. All five issues will be collected soon, and it is worth your money to buy them in hardcover.
Backwards in Seville by Audrey Niffenegger and Eddie Campbell is so original and captivating that it would make Bryan Talbot blush. It is a great example of sequential art at its best, and one of the most unique stories I have read seen since Alice in Sunderland. It is nice to see IDW put out some quality content here. While the book may not be flying off of the shelves, it is a testament to a slight change of thought at the publishing level. Hopefully this is a small step towards a shift in quality that has come to define publishers like Image, a company that makes all other books on the market seem inferior by scale.

Don’t worry if you’re on the other end, My Little Pony: Friendship is Magic #1 is available for sale at your LCS today. Although the bronies may win this round, IDW has put some skin in the game with Shadow Show. My interest is piqued, and I will open my wallet to future IDW titles. It may be a moot cause, but you have to respect their ambition.

Posted by The Hammond Comics Blog at 11:01 AM No comments: