About a month ago, I was presented with a preview copy of the new Sci-Fi comic book Brainstorm from FutureDude Entertainment. I was thoroughly impressed with the story setup and began finding out more about the company. This led me to contact the FutureDude, Jeffrey Morris, to present him with Another Seven Questions.

1) Hammond Comics Blog: FutureDude Entertainment is a fairly new company. Please tell us the story of how FutureDude came into existence and its vision for the future.

Jeffery Morris: I am really interested in three major areas: science (exploration), entertainment, and education. I founded FutureDude in 2010 as a way of unifying those unique disciplines. I grew up with an avid interest in space exploration, oceanography, and meteorology. My company reflects these interests by wrapping them in nearly two-dozen intellectual properties. These IPs are all sci-fi and cover a range of topics that have influenced and inspired me—from parallel universes to weather manipulation. We are building upon these ideas to create comic books, mobile device games, feature films, and television projects. I also hope to expand into related merchandise like toys! I miss the days of cool futuristic toys!

JM: I’m an artist and entrepreneur. But most importantly, I am a dreamer. I have always looked forward instead of backward. I grew up believing in the promise of stories like Star Trek and Space: 1999. I imagined a futuristic world populated by smart people doing amazing things. Pushing the envelope and expanding horizons. The gender and racial diversity reflected in 60s and 70s science fiction gave me hope as a child for a better tomorrow than the one I faced as a sometimes-bullied kid growing up in the suburbs of Phoenix. I have worked hard to create connections between scientists, educators and the public through my work with NASA/JPL and individuals like astronaut Buzz Aldrin. I have worked with kids to create curricula about the future while sharing visions of science and tomorrow. I try to infuse everything I do with sleek, believable design and forward-minded art direction.

3) HCB: What would you say separates FutureDude’s science fiction apart from the rest of the sci-fi genre?

JM: Big ideas mixed with real human stories. Spectacular production design and art direction—all created to serve a specified brand experience. We also try to focus on realism and plausibility. Starting from a basis in fact makes for some interesting storytelling. Very few stories in popular science fiction focus on a reality based approach. Aside from 2001 and a handful of other stories, movies are more about fantasy with a number of made up elements. We do occasionally stretch concepts. For example, in Brainstorm, we pushed the existing Fujita and Saffir-Simpson scales up by an additional number. This was done on purpose. We are completely aware the current limitations, however, we wanted to say that storms get so severe in the future that the scales have to be expanded. Science evolves. So should our perception of it — as long as there is a reasonable explanation for why and how it all changes. In many of our stories, we try to stay are real as possible, while perhaps breaking a few rules to maintain the fun factor 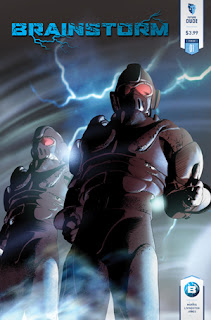 4) HCB: On futuredude.com, it states that it is “changing the face of science fiction in 2014”. It looks like this campaign will be starting in August with the release of Brainstorm. Please tell our readers in your own words why they should order this mini-series.

JM: Brainstorm is at its core, a human drama. It is interspersed with cool technology and a rip-roaring disaster film-style adventure. If you like your science fiction tinged with humanity, I think you will definitely enjoy it. It has fun twists and turns and a ton of surprises. The story also features a gay protagonist, something that is not typical in today’s marketplace and something that readers searching for diversity are clamoring for. 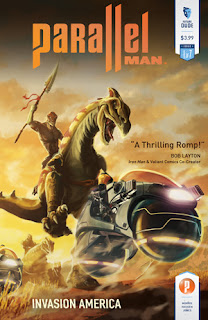 5) HCB: I am a huge fan of multidimensional thinking, so the premise of Parallel Man (Oct. 2014) is very exciting. In the series Agent Nick Morgan fights against the evil Ascendancy across the multiverse. How is the multiverse handled and traveled in the series?

JM: There are multiple concepts regarding how and why a multiverse might exist. I decided to look at quantum state as our basis. The Ascendency has developed “skipping” a technique that basically changes the “tune” of objects light changing a radio dial. The effect is visually spectacular and it extends beyond moving objects to actual weaponry in the story. We have everything from “skip bombs to skip pistols” — all of which alter quantum state and send objects between universes.
In the Parallel Man story, we have a hierarchy of universes that are conquered and explored. Alpha worlds are controlled by The Ascendancy. They have used their technology to control twelve worlds. Ours is next. Beta Worlds are ripe for exploitation with potential slave labor and resources. Gamma worlds are deadly and unfit for annexation by the Ascendancy. We visit all three in the story.

6) HCB: Next year FutureDude has planned on publishing a series called Oceanus. The series features survival at the bottom of the ocean after an asteroid collides with Earth ending life on land. Is there anything else you can tell us about the series?

JM: As of right now, we are focusing on producing a film project as opposed to a comic book series. I am directing it and it will be shot in Hollywood this Fall by an amazing team. I have assembled veterans who worked on films like The Abyss and Star Trek: The Motion Picture. My goal is to revitalize the underwater sci-fi genre. I will have more info on that project soon, including cast announcements.

7) HCB: If you were able to instantaneously receive one piece of futuristic technology, what would you get and why?

JM: My immediate inclination would be to have a transporter or replicator, but I would have to go with a Spinner—the flying car from Blade Runner. It would look extremely cool while allowing me to experience the dream of flight in a very fun and practical way on a day-to-day basis!

All of us at The Hammond Comics Blog would like to thank Jeffrey Morris for his time and awesome answers to our Seven Questions. It looks like Science Fiction fans will have a lot to expect from FutureDude. Be sure to check out Brainstorm and keep your eyes out for Parallel Man as well.
Posted by The Hammond Comics Blog at 11:30 PM 1 comment: 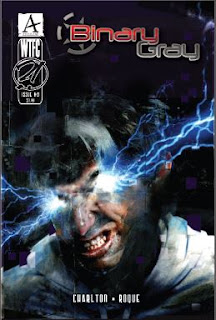 During my review of Binary Gray #7, I described it as the eye of a hurricane. The calmness after the fallout of Issue #6 made it a good analogy. What I was not aware of was exactly how good of an analogy it was. Now that the calm eye of the storm has passed, we are hit with winds from the opposite direction. If you are reading this series (and you should be if you are interested in comics at all), Issue #8 is going to hit you like you are standing in someones back swing. Once you come to, you will be saying, “Wow!” rather than “Ow!”

The past several issues have been more about The Virtue and the Agency. They have been at each others throats trying to either protect or capture Alex Gray and his unusual powers. Issue #8 is primarily focused on Alex and his current situation. The cover of this issue should give you a pretty good clue as to what is about to happen.
The issue is entitled “Karma Police” and starts off with a huge piece of Alex Gray’s background. This first portion is centered on his father back in 1972. Even though this is a huge piece of the puzzle that is Alex Gray’s past, it raises more questions than it answers. Chris Charlton is doing a superb presentation of the story line and backstory. The last few issues have been ending in cliffhangers. When you reach the end of “Karma Police”, you will need to remind yourself to close your mouth. The ending will leave you in disbelief.

Now that I have mentioned the cover, David Hollenbach deserves some cheers for his unbelievable work on this cover. As I have mentioned before, David H.’s style and technique is very unique and gorgeous, and this cover featuring Alex Gray’s face is no exception. On September 19th the Cincinnati Comic Expo begins, and Chris Charlton has informed me that Hollenbach is supposed to be in attendance. It will be a great honor to finally meet this gentleman and talk to him, so be looking for a possible interview in the near future.

Rowel Roque and Anthonie Wilson have gotten back on the same page in this issue. In Issue #7 the coloring was off and looked very bland. Fortunately this is not the case in Issue #8. The coloring looks great. Shading and line look really clean and well done. My favorite panel in the issue is on page 8, the long panel on the right, where Alex Gray extends his finger and thumb causing an electric blue image to form at the end of the finger. The blue in this panel really sets of the image and the rest of the work on the page. The electric image looks to be really glowing blue.

Again I would love to provide spoilers and talk on and on about what occurs in the issue, but then why would you pick it to read it? That would not be very fair to Chris Charlton and Assailant Comics. Binary Gray #8 will be available in about two weeks. Preorder yours today at AssailantComics.com. While you are there you can download the first two issues of Binary Gray for free straight from the company. This series is getting really juicy. I am just waiting for a “Luke, I am your father” moment to spring forward in any issue in the near future.
Posted by The Hammond Comics Blog at 12:30 PM No comments: