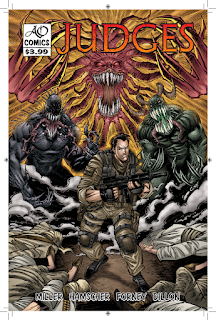 Anyone calling themselves a comic enthusiast has to love comic conventions, the small ones as well as the big. Smaller cons are actually where you will find those rare stories that you won’t find at most local stores. Many great comic writers and artists can barely afford to pay for a table at a smaller convention, so larger ones like SDCC and NYCCC are just a goal for them. A comic enthusiast at a small convention, like Kokomocon (www.kokomocon.com)in my local area, can dive in and find a great story to get behind.

Two years ago I met Chris Charlton of Assailant Comics at Kokomocon and have been following a few of his stories since. This year I had the pleasure of meeting Ben Miller, the writer of Judges. While talking to him, the book’s artwork jumped right out at me. Hamscher has a wickedly distinct flow to his drawing that screams action.
Read more »
Posted by The Hammond Comics Blog at 6:21 AM No comments: 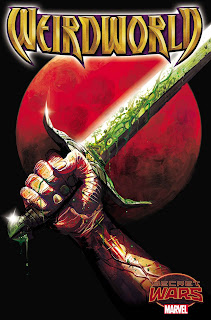 Ah, Secret War. The Marvel Zombies amongst the HCB need no explanation and the rest of the lot are probably aware of the event via osmosis.
Not to bore the reader base (or myself) with the minutiae of the event, the condensed version is as follows:
Multiverse destroyed, Dr. Doom gets godlike power, salvages bits & pieces of Multiverse and crams them together to form a patchwork planet called Battleworld.
In the wake, Marvel is pumping out what seems like several hundred dozen thousand miniseries highlighting corners of Battleworld, as one does.

Mileage may vary on these, but I've been pleased more than not with the results. Chiefly amongst these is Weirdworld.
Originally a 1970s fantasy comic by creative team Mike Ploog and Doug Moench, writer Jason Aaron mined the Weirdworld name for a new fantasy title starring Arkon of Polemachus, a semi-esoteric other-dimensional warlord best known for sometimes tussling with the Avengers.
The Secret Wars incarnation of Arkon sees the warrior searching the length and breadth of Weirdworld for a way back to his kingdom of Polemachus. Jason Aaron's interpretation of Weirdworld is nothing short of spectacular, and he seems as enamored with Marvel's esoterica as I. This miniseries so far has bestowed upon we reading public the following:
You heard right. Man-Things.

Sidebar, your honor:
Loyal readers may or may not be familiar with my deep, abiding love for shambling vegetable monsters. Swamp Thing, Man-Thing, The Heap, hell, I'll even settle for a Glob or two. So when I heard about a whole swamp full of Man-Things, I could hardly contain myself...

Indeed, after having a hearty tussle with Skull the Slayer, Arkon finds himself trapped in the murky swamp, surrounded by Man-Things. He and Skull attempt to fight off the muck monsters, but are paralyzed and taken before the Queen of the Man-Things.

The Swamp Queen, revealed to be this realms interpretation of Jennifer Kale, wages a guerrilla war against Morgan le Fay and I don't know if I can adequately express my love for this book. It's just chock full of arcane characters from the dusty corners of the Marvel Universe and plotted like it could have been a sword-and-sandals fantasy VHS from the 1980s
And I mean one of the really good ones, like The Warrior & the Sorceress. Or Deathstalker. The Barbarians, maybe...

Anywho, tormented by visions of an inverted Polemachus in flames and beset by Man-Things, our hero Arkon snatches his quiver of lightning bolts (you read that correctly) and makes good his escape.
Will he find his way back home?
Will Morgan le Fay catch up to our hero?
Will The Orb show up?
Does whatever knows fear burn at the touch of the Man-Thing?

All these questions and more answered in issue 5.

This comic is boatloads of fun, ladies and gentlemen. The subject matter is right in Jason Aaron's wheelhouse. A free for all fantasy-adventure book featuring some of the Mortiest of the Morts seems to really be the perfect vehicle for Aaron to tell a great story.
Still waiting for The Orb to show up...

Mike del Mundo is absolutely murdering it on the art detail, seamlessly dovetailing his art with Jason Aaron's writing. The art's got an almost ethereal, dreamlike quality that lends itself perfectly to the surreal nature of Weirdworld.
Marco D'Alfonso pitches in on color detail with del Mundo and the result is an impressive, soft palette that further enhances the trip down Weirdworld's rabbit hole.

My biggest problem with Weirdworld is the fact that only one issue remains. On the bright side there's been announced a post-Secret War Weirdworld title starring the Black Knight (hopefully sporting a leather jacket and wielding a lightsaber), but we'll have to see if the new creative team can capture that near-lightning in a bottle dynamic that Jason Aaron and Mike del Mundo have.


Posted by The Hammond Comics Blog at 6:19 AM No comments: 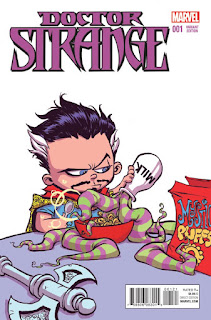 The Marvel Universe is filled with infinite possibilities – infinite possibilities that are left unexplored far too often in my opinion. My favorite titles from the publisher have always been Silver Surfer, Dr. Strange, and The Fantastic Four (RIP), so my tastes definitely lie in the realm of fantasy and science fiction – books focusing on making the impossible possible. When Marvel does this well, their story arcs can rival any publisher in the medium of sequential art.

About a year ago I wrote a pretty vitriolic review of Silver Surfer. We all know that Mike Allred knows his way around a pen, but what left me disappointed was the wasted potential and the wannabe Whovian garbage after all of that anticipation from Dan Slott. Since issue one the book has found its legs to an extent, but I wanted to be the one to pen this review to see if Marvel could really speak to their hardcore fan base with their re-launch of Dr. Strange, and hopefully in some way make up for their Surfer sacrilege.

I have been a Dr. Strange fan for years, rummaging through stacks of hand me downs from my brother who may be the biggest Strange fan in the history of the world. Seriously. It’s true. Even at a young age I thought that “Sorcerer Supreme” sounded a bit like a Taco Bell value item, but other than that each issue was fuel for the imagination.

Jason Aaron and Chris Bachalo are the perfect creative team to re-introduce Stephen Strange to the Marvel Universe. Starting with a backdrop that served as a great homage to Steve Ditko, issue one was non-stop action with a brief respite at a magician’s only pub that may have been my favorite part of the entire book.

The fact that Bachalo pencils and inks his own books gives the issue a distinct feel that makes him a great fit. Stylistically he is a great choice for the re-launch. With an ominous warning at the end of issue one that left me wanting more, I for one am definitely excited to see where this series is headed. It is way too early to tell if Aaron and Bachalo are going to be able come to give us a run that could rival the fabled Brian K. Vaughn miniseries or Steve Ditko’s early work, but the first issue has given me hope that this new incarnation of Stephen Strange will be a welcome addition to the already rich legacy of Marvel’s Sorcerer Supreme.

Posted by The Hammond Comics Blog at 6:18 AM No comments: