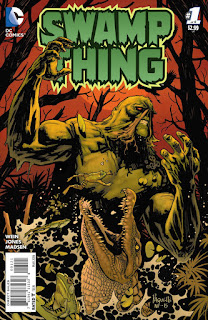 C'mon, you guys, like I WASN'T gonna review a new Swamp Thing book? Especially one by Len Wein and Kelley Jones?
Please . . .

I know you all look forward to hearing about my love of giant vegetable monsters, and this certainly is no exception. Although I lean more towards Man-Thing in my adoration of shambling mounds, ol' Swampy was my first love. You've all heard the the tale of one of my very first comics, The Saga of the Swamp Thing no.14. This thing exploded my 7-year old brain and there was no going back. It introduced me to both Phantom Stranger and Swamp Thing, a deeper level of storytelling, wonderful art, and that sweet, sweet newsprint back issue smell.
You know the one.

Swamp Thing's latest foray into print punched me right in the nostalgia with an opening page that paints the portrait of our title character's Louisiana bayou home.

Read more »
Posted by The Hammond Comics Blog at 6:38 AM No comments:

That’s right, three comics in one review. No extra charge. 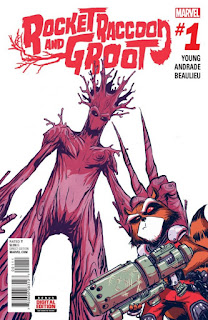 Highlights include: the new Guardians of the Galaxy, a mouse-like Rocket named Pockets, a Groot-like bushman named Shrub (and yes he “I am Shrub”s), Lord Rakzoon, and a feral graffitied Groot. Doesn’t matter.

Read more »
Posted by The Hammond Comics Blog at 6:37 AM No comments: 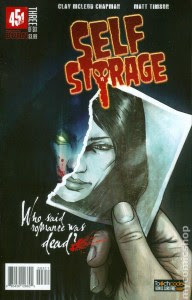 451 Media is a relatively new (to me, anyway) Indy company that popped up on my radar a couple of months ago. They had a few pretty enticing sales pitches, so I went ahead and ordered a few titles, including one about a werewolf biker gang, one telling the tale of a Dirty Dozen WWII squad of monsters a la the old DC Creature Commando books, and a whimsical little ditty called Self Storage.

Self Storage hooked me on its initial premise of a hapless schmuck who opens a storage locker and finds sequestered within a zombie girl.
Best. Storage Wars. Ever.
A down on his luck local yokel hoping to hit paydirt in an abandoned locker and finding a zombie girl is a pretty damn original pitch as far as I'm concerned, and I was in for the long haul.

Read more »
Posted by The Hammond Comics Blog at 6:35 AM No comments: 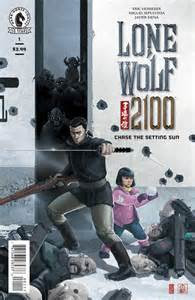 In the 1990s the vampire movement started with the pale undead invading books, movies, comics, and other entertainment media, By the time we hit 2005 most of the public would throw up in their mouths at the mention of anything else featuring the creatures. At the turn of the century we saw the trend move to zombies, and as fun as it has been, I feel zombies are well on their down turn. Alas, we are struck with yet another zombie comic.

In Lone Wolf 2100 #1 we are faced with zombies of a different color. A virus infects millions of people worldwide changing them into people-eating mutations called "thralls". Look, I get that the writer is trying to be different, but you cannot put wool on a dog and call it a sheep. It is still a dog!

It really amused me when I saw printed on the inside cover “inspired by the manga Lone Wolf and Cub”. They didn’t vary from the title much, so does that mean the story is almost the same as well? Is this plagiarism? I haven’t read the manga title, but it makes me wonder.

Read more »
Posted by The Hammond Comics Blog at 6:33 AM No comments: 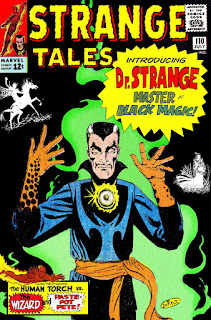 The cinematic juggernaut that is Marvel drops a Dr. Strange movie on the world later this year, and we've seen our first photos of star Benedict Cummerbund, or whatever the chap's name is. I'm ecstatic over this, as a longtime fan of Stephen Strange, because Marvel hasn't struck out yet with a movie (although Thor 2, Iron Man 3, and Avengers 2 were by no means home runs) and I cannot wait to see the big-screen adaptation. We've already had a hilariously mediocre Dr. Strange telefilm in the late 1970s and I'm sure he's had some animated series guest spots, but until now the best motion picture version of Doctor Strange was the early '90s Full Moon Entertainment masterpiece Dr. Mordrid.

Which is a great movie. I don't care what anyone says.

In any case, it seems fair that we take a look at the good Doctor's first appearance courtesy of a Masterworks collection recently bequeathed upon me by my loving girlfriend for Christmas.
3 cheers for nerd girlfriends . . .

Read more »
Posted by The Hammond Comics Blog at 6:32 AM No comments: