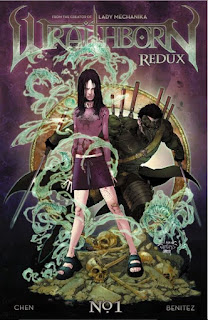 This week when I went to pick up the comics in my folder at my LCS, I found a strange new title therein. Wraithborn Redux #1 captured my curiosity instantly. The cover and summary on the back were amazingly done and captivating. Even though that was enough, when I opened the cover to the first page one of the best looking pages ever met my eyes. There is a scene drawn with just about the best image of the moon I have EVER seen. I will warn you there are some spoilers in here, but most of this is given away in the summary on the back cover anyway. Trust me; this will not detract from your enjoyment of this remarkable comic.

After I read this, my thoughts immediately went to Spawn, by Todd McFarlane. As complementary as I am intending this statement, it reminds me so much of Spawn, and yet, this story is completely its own. Marcia Chen and Joe Benitez have put a lot of work and thought into the main character, Melanie Moore, as shown in the story structure in the first issue.

The story is broken down into four sections. The first section is set in the present time with Melanie fighting some demon and explaining she was imbued with the power of the wraithborn to protect the innocent. The second section flashes back to Melanie during the day when she is given the power of the wraithborn giving us a glimpse of this timid, weak, and sweet young lady, which is a vast contrast to what we saw in the first section. The third section whisks us halfway around the world to see Brother Valin of the Zanshin as he is prepared to receive the wraithborn from its current wielder, Aegeus. The fourth section shows us Aegeus has a change of plans with the wraithborn when his path crosses with Melanie’s.

Reading this comic had me very excited. It is very easy to fall in love Melanie even though some of her methods and views really are a little on the dark side. Even though Valin is only briefly introduced, I feel he has been fleshed out as much as Melanie and I can’t wait to see more of him in the second issue.

All of this brings me to the artwork. All I can say is WOW! This has been one of the most visually appealing comics that have come home with me over the last two years. The details alone are enough to make your eyes fall out and roll across the floor. I already mentioned the page with the moon, but another image that made me linger on it was page seven, panel one, at the top of the page. This panel is done all in shades of green with such an incredible detail that commands attention.

On the back cover there is a small passage about this comic, and I will quote it here:

"Wraithborn Redux is a special revised edition of the original Wraithborn series published by DC Comics, with new and edited scenes by the series’ creators, Marcia Chen (writer) and Joe Benitez (artist)."

This comic has been published by Benitez Productions, Joe Benitez’s own company, and he has a bombshell on his hands here. Even though I never did read the original DC title, I am glad he had the intelligence and resolve to pursue this project on his own. Please support these creators and read this comic series.
Posted by The Hammond Comics Blog at 10:38 AM