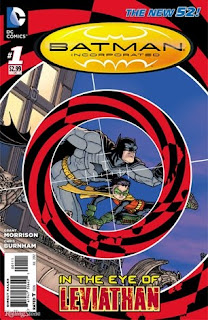 Really? What the hell? There are just way too many turn offs between the covers. I try to be a well-rounded fan boy with a little bit of this and a little bit of that…..and this is how you repay me DC? Shame on you. Robin looks more like Herve Villechaixe from Fantasy Island then a boy wonder. If not Herve, then a dark-haired Chucky. The assassins name is Goat Boy. The main villain is this Crypt Keeper looking chump named Leviathan. Leviathan’s body guards are bat men. Burnham’s bat mobile is the lamest I have ever seen…..bat-cow.
There were a few things that tickled my fancy. There was a brief Silence of the Lambs moment (I love that movie) when Leviathan makes this jerk eat his own brother. That’s just freaky. No one wants to eat his own brother. I also liked the part when Goat Boy with rocket rifle in hand and X’s in his eyes shoots the “Boy Wonder” in the brains (at least he didn’t dress up like a goat for nothing). The best page in this comic is the full page advertisement for the season premiere of Falling Skies on June 17 ( I also love this show). I’ll be there sans the Boy Wonder. It just goes to show that if you walk around barefoot sooner or later, you’ll step in dog shit. 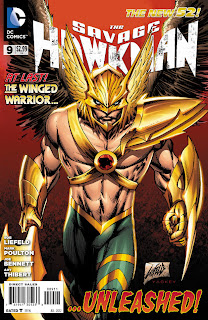 I know, I know. I reviewed a few issues of Hawkman a while back. I hated it. I even said I’d never buy another issue. Well, I lied ( about the buying not the sucking). I never stopped reading. I couldn’t. I had to see just how bad it was going to get….and it got real bad. Unbearable at times. The story lines sucked. The art was lame. That was then and this is now. Issue nine heralds a new beginning. Daniel and Bonny are out. Rob Liefeld and Mark Poulton are here to save the day. The art is fantastic and the writing is engaging. Someone at DC must have read my previous posts and took them to heart, and decided to make a change…..you’re welcome world….you’re welcome.
I only have two DC titles on my pull list The Savage Hawkman and Resurrection Man. I plan on catching up on Aquaman and Green Arrow in the trades, other then that unless Frank Miller comes back to Gotham, DC can kiss me in the Goat Man.

Posted by The Hammond Comics Blog at 5:59 PM