This week I get a chance to interview Keeper writer Geoffrey Wessel. Keeper is a crime/mystery comic, that's as bloody as it is brilliant (cockney pun intended). One of England's most notable keepers happens to get a little stabby at night, chippy proprietors better be on the lookout because killing is Scott Winslow's business and business is good. Geoffrey Wessel was kind enough to answer some questions about his awesome new read, and at The Hammond Comics Blog we couldn't be happier. 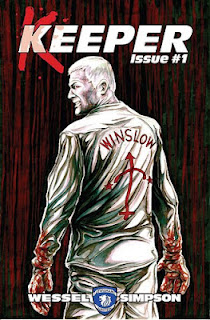 William: Is Keeper going to be a limited or ongoing series? How many issues of the book do you plan on publishing?


Geoffrey: As of right now, I have KEEPER planned as 6-8 issues. I'm of the opinion that stories should have a definitive beginning, middle and end, so no, I can't see myself milking fifty issues out of KEEPER. And it's diminishing returns, isn't it, when you have characters like Scott, the longer it goes on, the more ridiculous and far-fetched it becomes for him to keep getting away with it, isn't it? So, yeah, there will be an ending; there will be a reckoning.


William: Soccer is not the most well received sport in America. Are there any worries about the popularity of the sport becoming a detriment to the book?


Geoffrey: Luckily, thanks to the magic of the internet, America doesn't have to be the sole market for KEEPER. That being said, yeah, it's a hindrance, but mostly when it comes to convincing publishers to go for it. Thankfully there's always new alternatives cropping up for how to sell comics in 2012. It really is a new frontier. But we already knew KEEPER would be a tough sell all over going into it. It's not a soccer comic, per se, it really is a crime story, taking place within the world of soccer. 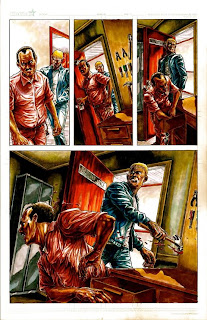 William: There is a symbol on the cover of Issue One that Scott Winslow has been leaving on his victims. As of yet there is not explanation of the origin. Are you able to explain the meaning of that symbol here, or are you planning on revealing that in future issues?


Geoffrey: It's part of the mystery, but it will be explained.


William: Scott Winslow seems to be a pretty level headed character despite his homicidal tendencies. He also seems to be harboring delusions of grandeur about wanting to be remembered as a historic figure. What are his psychological motives for adopting his alter ego?


Geoffrey: It's good you've picked up on that, I think you might be the first one to have said so! But again, wait and see, you'll find out his motives.

William: After only two issues the police seem to be hot on the trial of Scott Winslow. How is he going to be able to stay one step ahead of the police in future issues of Keeper?


Geoffrey: If I told you, there wouldn't be any reason to read KEEPER now would there? Still, yes, you'll see what happens. Scott may NOT be one step ahead after a certain point. Maybe.


William: Who are your influences as a writer?


Geoffrey: Too many to list with any coherence. Comics wise, y'know, Alan Moore, Grant Morrison, 2000AD, the usual suspects. I learned a lot about constructing decent crime stories from Brian Azzarello and Jason Aaron in particular. Irvine Welsh, Chuck Palahniuk, William Gibson, Douglas Adams, Bret Easton Ellis... but I read a lot, so everything is an influence one way or another. I just hope none of them are TOO obvious!


William: When can we expect issue 2 of Keeper to hit comic store shelves?


Geoffrey: Well, unfortunately since neither (artist) Jeff Simpson nor myself are getting paid to make KEEPER at the moment, we really only can release one page per week. We're in the final 5 pages of Issue 2 however, so I'd say it'll be probably Fall earliest when we have a print version of Issue 2 ready to go. But we might have something else ready beforehand. Stay tuned.


We want to thank Geoffrey Wessel for agreeing to answer some questions about his heady new comic. Keeper is into it's second issue and new pages are released weekly. You can pick up issues zero and one here: http://www.keeper-comic.com/Site/Home.html They are also available to read online. I'll talk to you guys next week. Have a great holiday, and stay classy dickheads.


By: William R. Davis Jr.
Posted by The Hammond Comics Blog at 8:45 AM