This week I get a chance to interview God Hates Astronauts creator Ryan Browne. God Hates Astronauts might be the funniest book out right now. Hell, I even drove all the way to Mokena on Free Comic Book day and stood in a 30 minute long line just to meet this guy. This cat isn't a ride at Great America, but he might be the funniest and most innovate comic creator on the planet right now. To prove it I have the God Hates Astronauts shot glasses, the shirt, multiple copies of issues one and two, and an awesome sketch of The Anti-Mugger that I had framed. File your restraining order now sir. Honestly, I cannot verbally felate the man enough. Mr Browne also created another hilarious read: Blast Furnace, and is currently doing some great artwork for the IDW series Smoke and Mirrors. 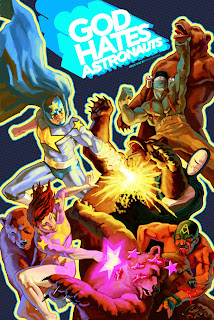 William: Who influences you both as a writer and artistically?

Ryan Browne: The creators that inspire me the most through their art are Geof Darrow, Rob Schrab, Mike Allred, John Paul Leon, Fiona Staples and James Jean. Personally I find a lot of inspiration from the writers and artists that I know and work with. Seeing the creative process of others makes me excited to contribute my own work to the group.

William: Carl Winslow and Montel Williams both make appearances in God Hates Astronauts. Are you going to grace us with any vintage TV actor cameos in the future?

Ryan Browne: Not really planning on it at this point. Both Carl and Montel have special places in my heart. I was a guest on the Montel Williams show (long story) and Carl Winslow finds his way into every single book I make. He is currently appearing as a security guard in Smoke and Mirrors issue 1.

William: Blast Furnace is a book that you worked on for a period of six months, drawing one page a day. What gave you the idea to create Blast Furnace using this format?

Ryan Browne: That was inspired by a couple of frustrations. First, I was starting to get regular paid work so pages of God Hates Astronauts were few and far in between. Due to the growing frustration of fans wanting regular updates, I thought it would be a good idea to have some sort of quicker and more frequent out pour of silly throw away jokes- thus Blast Furnace was born. Second, I realized that working on GHA and spending so so so much time on the art, I wasn't telling as much story as I wanted to tell. Doing it in a more immediate fashion, since that's how I prefer to write, seemed like a good solution to me. 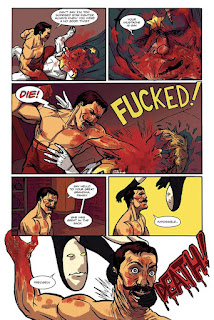 William: The Power Persons 5 is a supergroup funded by NASA whose main purpose is to stop private astronauts from attempting space travel. We have not seen much of this in the plot thus far. Is this a storyline that you're going to explore more in the future?

Ryan Browne: That's the idea. When the trade paperback of the first three issues comes out I am toying with the idea of inserting more scenes that kind of bring that concept to the fore-front. Since issue one is three pages shorter than issues two and three, I wouldn't be surprised if you see me George Lucas in a few pages for the trade.

William: The Anti-Mugger is hands down my favorite character. In the issue three teaser released online he quits and leaves The Power Persons Five. Is this the end of The Anti-Mugger in God Hates Astronauts?

Ryan Browne: No. The Anti-Mugger is here to stay! I'm not sure what his role will be, or what comes of the mutated baby arm on his chest, but I'm sure it will be sweet.

William: Tell us more about your work on Smoke and Mirrors. Also, are there any other projects with IDW in the works?

Ryan Browne: Smoke and Mirrors is a good exercise for me working out of my comfort zone. It's much more story and character driven than anything I have ever worked on before. It is the first book (as far as we know) that actually does magic for the reader which has been a fun challenge for me as an artist and as a person who knows nothing about magic. Thankfully I'm not working alone on this book. It is written by long time friend and amazing writer Mike Costa and features magic tricks that are engineered by the world famous slight of hand magician, Jon Armstrong. At this point the mini-series will end at issue 5, but depending on the success of the trade paperback, there is a possibility for more stories in the world of Smoke and Mirrors.

Ryan Browne: I will be finishing GHA issue three as soon as Smoke and Mirrors wraps up (probably in July) and then I have some great plans to make an amazingly fun trade paper back collection with tons and tons of extras and guest artists- all of which will hopefully be funded via kickstarter.


We want to thank Ryan Browne for taking time out of his busy schedule to talk about his work. Check out the link below. You can read God Hates Astronauts online for free, but I highly encourage you to pick up both issues through the site and reward Ryan Browne for his amazing contribution to the world of comics. Blast Furnace is a must read and is also for sale as well. Smoke and Mirrors issues one and two can be purchased at your local comic shop right now. Go get you some today. As an added bonus, I'm going to dip into my personal stash and kick down issues one and two to the first person to write "God Hates Astronauts" on our Facebook wall. If you do not "like" us on the book, the link is below. Take it easy losers. I'll get at you again next week. And a special thanks once again to Chicago's finest, Ryan Browne.

http://www.facebook.com/hammondcomicsblog
Posted by The Hammond Comics Blog at 9:40 AM