This is the first free comic book day that I have been able to celebrate since 2009. For the past couple years I taught English in South Korea, and while comic books are plentiful in the land of the morning calm, none of them are in English, and none of them are free. 2009 brought the Blackest Night sereis debut book, and I was hoping for something of that caliber this year. I ended up hitting two different shops, and picked up nine free books. This week I decided to give you the run down on every book that I was able to grab from the hands of the 40 something mom crowd that gorge themselves on every free tidbit they are thrown. It's funny that the majority of the people that you see in the shops on FCBD do not really read comics, but they do like free shit. I suppose that the point is to attract new readers and sell a bunch of books, but the sad reality is that the day after I always see the same crowd back in the shops again. I'm sure many of these free books were glanced at and then tossed in the trash a week later, but I did happen to see a ton of young kids grabbing as many back issue supe books as their little hands could hold. In that aspect, I'm sure that FCBD is a retailer's dream come true. Here we go, I will give you a few quick hits, rate the book, and at the end pick a best and worst from my stack of freebies. 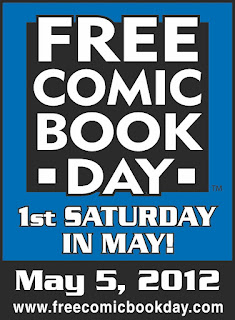 The Hypernaturals- The Hypernaturals is a sci-team team up book featuring a group of heroes that protect society. This is obviously not a new concept, but Dan Abnett was writing so I figured that it could take the team book to some place a little different. The finished product was a pretty sub-par effort. Nothing new or exciting within the pages of this one. There was one little part that I enjoyed where an ex Hypernatural ordered a gin and milk. This one isn't going anywhere near my pull list. 4/10


Ultimate Spider-Man- I'm not a spider-man fan, at all. The lame jokes and pussiness of Spidey (Madman is going to ream me for this) have always made me hate his books. Ultimate Spider-man seemed to be geared towards the younger fisher price my first comic crowd. It was a rehashing of the Spider-Man origin story with even lamer jokes because it was being marketed to children. It probably accomplishes exactly what it was trying to do, but I'm not six and Spider-Man sucks ass so I couldn't get through this one any quicker. 0/10


Valiant 2012- Never really read any Valiant books. Both stories were short but very entertaining. X-O Man of War had some good looking art, and since I was not all that familiar with the old series it left me wanting more. Harbinger was a little less enjoyable but still a pretty good read. It didn't make my pull list, but this was the first book that I enjoyed so far on any level. 7/10


Bad Medicine- A mystery book with some great art and characterization, this one made the cut. Bad Medicine has the distinction of being the first book that made my pull list. The story was a little confusing and took some rereading but it had an awesome cliffhanger ending. Very entertaining read, appropriately funny, great effort by Oni Press. 9/10

Graphic Elvis- This one was a graphic tribute to the King of Rock and Roll. There were a lot of great quotes and art in this book. Bob Dylan, Sinatra, Keith Richards, and Stan Lee all in one comic. Not bad. This is not a ongoing series, merely a preview, but I would buy this book if I liked Elvis more. Really innovative and interesting. 8/10

Moomin Valley Turns Jungle- This one is a kids book, but if I had a kid they would be reading this hopefully and not that shitty Spider-Man comic. Light and funny with great art. This one definitely made me chuckle more than once. I found it visually pleasing and very entertaining. Great for ages 5-12. 7/10

Bongo Comic- Most notably, Bongo Comics produces The Simpsons comic. You will not find a bigger Simpsons fan out there. My friend The Gooch and I can have entire conversations constructed completely from Simpsons quotes. However, I have never read the comic. The truth is that it's really hard to turn a show like The Simpsons into an interesting comic book. They generally dumb it down and stick it in drug stores marketed to kids as an impulse buy. Surprisingly enough, the book was really funny . This contribution was right up there with the show. There was another short called My First Peso, an autobiographical piece that I absolutely loved. This one was a lot of fun to read. There was a Sponge Bob short as well, but I fucking hate Sponge Bob so it went unread. 8/10

Anti- Awesome story about a coming apocalypse and demon hunting. The plot seemed a little on the Supernatural rip-off side, but it was really well executed. The art was great. I would definitely put this one on my pull list. The short named Ride was absolutely amazing. Ride was a dark little tale about a guy that picked up this girl at a key party, and then when she wouldn't put out he killed her and drowned her in the car. Really creepy and sociopath laden awesomeness. I want both of these books. Well done 12-Gauge. 9.5/10


Wtichblade- I've never been a fan of Witchblade, and I did not like the reboot. Average, average, average. The art was good, but I rushed through this one and will never give it a second thought again. Why did I pick up this book? Greed. Shame on me. 4/10


By: William R. Davis Jr.
Posted by The Hammond Comics Blog at 7:49 AM