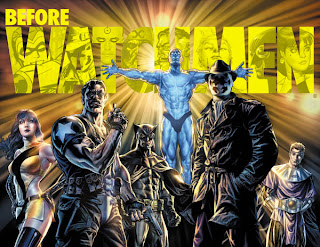 "DC Comics would only revisit these iconic characters if the creative vision of any proposed new stories matched the quality set by Alan Moore and Dave Gibbons nearly 25 years ago, and our first discussion on any of this would naturally be with the creators themselves."-attributed to a statement made by Dan Didio and Jim Lee.


Before Watchmen: A Tragedy Told in Several Parts, and a One-Shot or Two. Because after 25-plus years, DC Comics suddenly realized there were SO MANY unanswered questions about Alan Moore and Dave Gibbons Watchmen.
Unanswered financial questions, questions about a shameless cash-in...
Cash-ins like Jim Lee 1:9,000 variant incentive San Diego Comic Con retailer exclusive Wizard World mail in 5 box tops from Wheaties and 1400 Marlboro Miles covers.

Before Watchmen: Moloch had 2 issues and seven covers. Seven! That's 3.5 covers per issue.

I couldn't begin to artfully craft a critique about these series, but I figure if DC couldn't artfully craft the actual books, why shouldn't I follow suit with some haphazard, slapdash writing of my own? Random points of interest/irritation follow.
Also, spoilers, but who cares?

Rorschach: Eating cold beans. Because it couldn't have been just a random touch in the original, fuck no! Brian Azzarello deemed that Rorschach prefers cold beans over other sustenance. Also, nothing of interest happened in this miniseries, which revolved around the vilification of clergy and Rorschach's doomsday ideals.


Minutemen: really disappointed in Darwyn Cooke. I could have gone my entire life without seeing a roughie sex scene betwixt Hooded Justice and Captain Metropolis. And they have a mountain hideout like the JLA base from the 50s? Where was Snapper Carr during this miniseries?
And the hell was up with Comedian and his sinister revenge plot? Uncharacteristically Machiavellian of him...


Dr. Manhattan: you remember those sequences in Watchmen where Doc Manhattan would get all retrospective and nostalgic about his past and have some dreamy, existing-at-all-points-in-space-and-time-simultaneously flashback?

Imagine that, but lasting four issues and having no point.

Oh, and remember that sweet clockwork crystal palace thinger he made when he was on Mars? It seems young Mr. Osterman's father bought his son a table clock/astrolabe device when he was a lad.
Guess what it looked like?


Comedian: Why is Comedian playing grabass with JFK and Bobby Kennedy? Jackie put a hit out on Marilyn Monroe? Wasn't it intimated that Comedian killed JFK? And if I wanted to read a comic about a soldiers tribulations and trial during the horrors of The 'Nam, I'd read...
well, I'd read The 'Nam.
Not Full Metal Jacket starring The Comedian.


Of note: A Moloch miniseries? Really? Why? I hear a Dollar Bill one-shot is happening. I reiterate: why?
What's next, Before Watchmen: The Adventures of Magazine Stand Guy and That Black Kid? Or how about Before Watchmen: Hollis Mason's Dog: The Early Years?


Crimson Corsair: This backup is pretty well without merit. I feel bad saying so, because I usually like Len Wein's work, but it really is poorly approached. I find myself uninterested in it, failing to remember what the last installment was about, and wishing that they weren't trying so fucking hard to emulate the original formula by force-feeding us a Tales of the Black Freighter pastiche.


Ozymandias: So the giant psionic death-squid was a nod to an Outer Limits episode called 'The Architects of Fear', in which a think tank mutates a fella to look like an alien and the subsequent revelation is meant to stop the Cold War in the face of an extraterrestrial threat. The Ozymandias mini shows us that Adrian Veidt has realized he must save the world from nuclear war and he turns to science fiction books and television for inspiration. Including The Outer Limits, where he watches an episode featuring a group of scientists who "transform one of their own into a grotesque alien designed to frighten humanity into banding together..."

I want to kick DC Comics in the nuts.

Funny little anecdote here: when the original (or good, as it will be known) Watchmen was coming along, Len Wein ceased working on the book because he felt the ending was entirely aped from this Outer Limits episode, and Uncle Al refused to alter his script. Len Wein wrote the Ozymandias miniseries.In which he makes canon the fact that Veidt is inspired directly by the Outer Limits for his Squidplan.

Making the Ozymandias miniseries a six-issue backdrop for Len Wein to scream, "Fuck you, Al!" And flip him the bird after stewing on it since 1986.

Because that's what these miniseries do. They try to one-up the dystopia crafted by Misters Moore and Gibbons, and in doing so simply serve to dirty the source material, to heap trash and grime on it. And not in that post-industrial, visceral, Nine Inch Nails sort of way. It's more like finding sex Polaroids of your aunt. I'm especially bemused by JMS' involvement in this, considering his sour attitude involving the final arc in Amazing Spider-Man and the editorial changes that befouled his original concept. I know the argument could be made that Alan Moore is doing the same thing in League of Extraordinary Gentleman or Lost Girls, writing about characters established in another authors work. The difference betwixt the two has as much to do with the spirit of the writing as the letter of it. Alan Moore isn't writing a definitive retelling of these characters so much as he's writing a tongue in cheek, non-canon, sometimes pornographic, alternate continuity. He isn't expecting the reader to forevermore believe that Alan Quartermain became a junkie or that Dorothy Gale maintained an incestuous relationship with her father in their respective source material.

Lost Girls is really weird and kind of banal, by the way.


Let me entertain another theoretical example, if I may. Several years after the conclusion of a popular DC Comic series, high-ups in the company decide there is a wealth of untold stories to be mined from the source material and before you know it, BAM! you get Preacher II: the Further Adventures of Jessie and Tulip. Brought to you by Jeph Loeb and Rob Liefeld.

To be fair, I could make reference to Marvel bleeding King Kirby's corpse dry, but Dynamite Entertainment beat them to it.


Also, drawing the line at 2.99 my finely chiseled ass. I know they advertised all titles at $2.99. Well, except certain special titles.

Or if the book sells well.

What's that? Suicide Squad is selling well? Better pop that baby up to 3.99 ASAP!
I understand that they're slicks with snazzy covers, but I'd rather have newsprint with a cheaper price tag and better writing, which is a pretty good metaphor for the whole debacle, I'd say. The original Watchmen was a simply presented pulp newsprint comic with a great story, artfully crafted.

Before Watchmen is a turd wrapped in a pretty package.


I can't fault the art. One thing I will say for this mess is the art is pretty damn good throughout, with the exception of them trying to cram the smiley face into every nook and cranny. It was clever when the smiley face was a feature on Mars because there actually is a rock formation that looks like that. However, bacon and eggs and car engines rarely, if ever look like smiley faces.

Amanda Connor is dead brilliant with her 60s counterculture Silk Spectre. Darwyn Cooke's Minutemen looks pulpy and Art Deco. Anything by any of the Kubert boys is always amazing, and Jae Lee lends an ethereal, art nouveau quality to Ozymandias.
Who, by the by, shares his bed with blokes as well as birds.

Because, y'know, Rorschach thought he maybe was gay in the original maxi series, and far be it from the writers of Before Watchmen to leave any stone unturned. And then picked up and thrown through your picture window...

And therein lies one of the biggest faults with these series. Any unanswered questions, mysteries, or sly references from the original series are answered or explained. Well, I for one liked the fact that what really happened to Hooded Justice was conjecture. I liked that the circumstances surrounding The Silhouettes death were hazy, and I certainly didn't need the origins of all the characters hand fed to me.

At the end of the day, who cares about the nuances that drove Nite Owl and Rorschach to become vigilantes? Who cares about Blake's details in Vietnam? I'm fairy certain these things were hinted at or subtlety explained in the source material. The Comedian guns down the woman pregnant with his child in Vietnam. That says enough. You really don't need a six issue miniseries explaining how fucked up of a man he is.

Really, this stuff is as bad a prequel as Prometheus. It's Star Wars: Episode 1 bad. It's Boondock Saints 2 bad. It's as bad as that one horrible thing you can think of, and its horrible brother. It's that sequel/prequel that's so bad it makes you like the original less because it feels like the source material is tainted by its very existence. It's almost entirely comprised of nods to the original, making it feel like the book is nudging you in the ribs every other page, saying "hey, hey, hey, remember how cool and innovative this was in the original? Do ya, huh?"
Yes. Yes I do remember, Before Watchmen. I remember how cool that was.
The first time.

Posted by The Hammond Comics Blog at 7:57 PM