...because screw you guys, I liked the Daredevil movie. 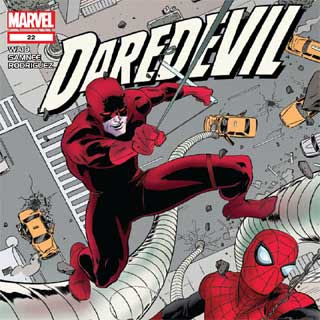 Okay, now that I've lost 3/4 of the readers, let us continue.

I'm not gonna blow smoke and tout my love of Daredevil dates back to the days of Frank Miller's run. None of that, "I was there when Bullseye killed Elektra, man!" 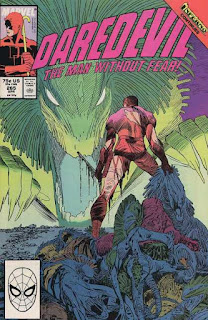 Because I wasn't. I was like two years old when that happened. I think my first Daredevil books were from the 'Last Rites' arc, where Kingpin's uppance had come (the first time...). The only other Daredevil I'd read up to that point was from the Inferno crossover, back in the days when a crossover happened it affected other books. It was awesome, and you should go buy it right now. Number 265. Go.


Interest in Ol' Hornhead waned in the chromium and die-cut 90s, but Bendis and Brubaker lured me back. After brushing up on Frank Miller's run I got back into the ring and was ready to go a few rounds with Matt Murdock.

Civil Wars and Secret Invasions and Houses of M seem to leave Daredevil relatively unmolested in his own gritty corner of the Marvel Universe, and for that I am thankful. With the exception of the GAWDAWFUL Shadowlands story arc, Daredevil is a good refuge for readers seeking sanctuary from mega-events and proves time and time again that a blind guy in red tights beating up ninjas does the soul good.

Daredevil's current series is scripted by Mark Waid, who has written just about everything at some point, and he's done a phenomenal job of grounding the character and sweeping under the rug some of the weaker plot points from previous arcs. This particular issue features Daredevil meeting up with Spider-Man, the Superior version, not the Friendly Neighborhood version. Those of you out of the loop on Spider-Man's current status quo should read Cody "Madman" Miller's latest review. It'll help.

It seems Daredevils current ladyfriend thinks him a menace and has entreated Spider-Man to bring him in. As a side note, another endearing trait of Daredevil is that he is an irredeemable, skirt chasing p***y hound, and this always (always!) leads him astray.

In any case, Daredevil and Spidey mix it up for a few pages, and in that tried and true cliche trope are forced to put aside their differences and combat a common foe. The foe being Stilt-Mans latest incarnation. I've no idea why, but I've always liked Stilt-Man. Probably because he (and sometimes she) is such a heel, and modern writers realize that and usually inject some humor into any story they write with the character in it. Even the one where Punisher blew his legs off with a rocket launcher.

After besting Stilt-Man, Spidey and DD part friends and Daredevil bounds off to make amends with his partner, Foggy. Another Daredevil theme is he seems to lose his license to practice law and alienates himself from Foggy every few years. I expect Bullseye to pop in and kill one of his girlfriends in an issue or two, just so the cycle completes itself.

Hornhead spends his last $20 on a peace offering and has an emotional heart-to-heart with his homeboy Foggy and the issue ends with a bomb dropping plot point.

Not a literal bomb, mind you, although Daredevil does seem to get his brownstone law office and/or studio apartment blown up every few years as well.

Both the art and storytelling have been extraordinary in the book, with Waid embracing the lighter, (sigh) devil may care attitude that DD possesses whilst balancing the grittier aspects of the character. Chris Samnee is on art detail, and both he and Paulo Rivera have lent an almost pop art look to the book. The style is not for everyone, especially those married to the more traditional four-color superhero style, but it works for Daredevil. One aspect I've really latched onto is how the art team has done a phenomenal job of illustrating Daredevil's radar sense. The cover of issue 12 is a good example of the techniques used.

I had some nitpicky, fanboy gripes about the brief melee Daredevil had with Spider-Man, but nothing I can't save for a comic forum. The largest actual complaint I had about the book was the aforementioned peace offering DD gives to his buddy Foggy. Y'know, the one I mentioned he spent his last $20 on?

A bacon and Limburger cheesecake.

After he chows down on a peanut butter-pistachio-bubblegum fudge pizza with the other turtles he has a bacon and Limburger cheesecake for dessert.