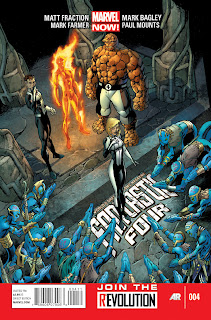 Matt Fraction is the best writer at Marvel right now. That's not just a Marvel Now pun, the man is talented, without question. When I heard about the Fantastic Four reboot he sounded like the perfect man to take up the mantle. And it's a huge responsibility. Historically, this book changed the superhero genre forever. Kirby introduced a groundbreaking new style in it's pages. Stan Lee changed the superhero by giving it a more human face, and it all started with the Fantastic Four. The first 58 issues of this book were a total game changer all around. Silver Surfer, Galactus, Dr. Doom, they're all in there. Matt Fraction understands this, and Bagley's artistic style fits with the title, giving the book a nice, nostalgic, throwback quality.

The reboot started with a really strong with issue one. The Thing and his run in with the Yancy Street gang gave me the warm fuzzies. And the YouTube video of them humiliating the "Dummy" was on point, as well as a symbol of Fraction taking the book into the future. To be honest, I'm not a Franklin or Valeria fan. One of my favorite parts of the first few issues of the Lee/Kirby Fantastic Four is Sue Storm's love affair with King Namor. When they found Namor's picture under her pillow, it really helped set the tone for the book as the Father Knows Best superteam in the Marvel Universe. However, the new Fraction/Bagley FF happens to also retain this quality, even though the origin tale is slightly different. This is definitely a book that can be enjoyed by both children and adults, but probably more for adults, and here's why.

Issue four is a Valentine's Day issue. Anyone steeped in the history of the Fantastic Four will have at least a little appreciation for a 21 page love letter to Sue Richards. But as the fourth issue of what's supposed to be a complete reboot, it comes up pretty short. Kids unfamiliar with the title's origins will be bored to tears. Although it also works as a setup issue, with five promising to have way more action, the stakes so far are not very high. The story is slow...really slow. The premise of the current arc is not without merit, it could have porterhouse stakes, but so far the other title "FF" is running away with the ballgame. I'm going to keep reading, but this book needs to kick into high gear quick because I'm starting to get the yawns.

And don't get me wrong, I know that it's next to impossible to follow in the footsteps of the great Jack Kirby, but the art has been hills and valleys through four issues as well. The landscapes are near perfect, beautiful, rich and detailed; they help to set the tone well. But either Bagley is really inept at drawing people, or suffers from extreme laziness in almost every panel. I'm going with the latter on this one. The distorted figures that seem to permeate almost every background are weak. Bagley can do better than heads that are boxes with dots. You will find these distracting, pedestrian Lego people everywhere, and they all scream: "Fuck it."

I need to throw in a quick caveat before making my next point. Keep in mind that I live in Asia, and that all of my anthologies are at my sister's house in Indianapolis. This makes research hard. But I remember one of the early issues when they first see the Black Panther. I think it is somewhere in the fifties but I can't remember. Anyway, there is a Wakanda temple scene in that issue that completely blew my mind grapes. It is a great example of the meticulous detail that Kirby put into his art. The only comic artist that can top Kirby is Chris Ware in that department; and that is really saying something. The new Fantastic Four is going to need that kind of commitment in order for this run to be remembered as one of the greats.

And although I am thoroughly delighted by Fraction's homage to the original Fantastic Four creative team, he really needs to pick up the pace with the story. I might be the only one out there that hated Hickman on the book, because I felt that the story became really muddled and convoluted after awhile. Fraction's has much more potential in my opinion, but cannot be overly simplistic and still succeed. The stakes were really high during the Lee/Kirby Fantastic Four years, and they need to be just as high in order to make this new incantation work. I'm not feeling thoroughly engaged in the plot after four issues, and that's a huge problem.

This could be a great book, but it's too early to tell. The only issue where I felt like I really got my money's worth was issue one, and they have steadily declined in quality since, with four being the worst one yet. However, I'm going to stick around for at least a couple more. The story really seems to be building towards something, and I pray to the ghost of Kirby that it starts to pop off in issue five. The world of comics, and especially superheroes, needs a strong Fantastic Four title. Marvel put Fraction and Bagley in the driver's seat, and while I'm anxious to see where they take us in the near future, the present, unfortunately, is a pretty dull one.
Posted by The Hammond Comics Blog at 4:13 AM