Another Seven Questions with Ryan Browne 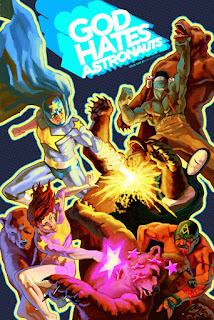 Welcome back to another Seven Questions. One of the great things about writing for the HCB is that we often get to do interviews with some of the best and the brightest in the business. This week is an extra special treat for myself though. Awhile back my pull list was a little thin and I spent part of my afternoon cruising through the racks at my local comic shop. I saw issue one of God Hates Astronauts on the shelf and the rest is history. I've read a lot of comics over the years, and God Hates Astronauts is in my top five all-time favorites, hands down. Any fanboy knows that picking just one is impossible. Ryan Browne is one of the most hilarious, edgy, and innovative creators in the game right now. Today he's here to talk about God Hates Astronauts: The Completely Complete Edition, and we at the HCB could not be happier.


1) What do you love about God Hates Astronauts?


That I can do anything I want. My only rule of GHA is that everything within the universe is taken with utmost seriousness by the characters. The fact that no one will ever acknowledges how absolutely insane and nonsensical everything in the world is makes it a lot of fun to just go crazy. I also love that it is just an outlet for any stupid joke I might come up with. The book is really just to make myself laugh, the most joy I get from it is several years down the line when I rediscover some little joke that I have completely forgotten. That's awesome.

2) What makes the "Completely Complete" edition of GHA so complete?


It has everything worth printing, all together in one place. It's a 180 page hardcover book that features the entire God Hates Astronauts story that was on the web, re-lettered and color tweaked, a ton of pin-ups from artists like Ryan Stegman, Tom Fowler, Chris Burnham, Mike Norton, Rebekah Isaacs, Ethan Nicolle, Nick Pitarra and a ton other awesome people. It features 36 pages of brand new origin stories written by me and drawn by guest artists such as Tim Seeley, Tradd Moore, Tom Scioli, Jenny Frison, Chris Mitten, C.P. Wilson 3, Kyle Strahm, Hilary Barta and a ton others. And it has the two GHA Universe 24 hour comics that I have created. It's a pretty damn sweet package.

3) Is this the end of The Power Persons Five, or are you bringing back God Hates Astronauts for another run? Could there possibly be an Anti-Mugger spinoff book in the works?


If I can find a way to make money on GHA (Come on' Kickstarter!) I will certainly continue the story. Perhaps the next book will be the Completely Completer Edition? There certainly are about a million more stories that I have in my head, it's just a question of finding a readership and some money so I can spend the proper amount of time on creating them. Certainly the next time we see the Anti-Mugger he will not be in the form that we know and love. A lot of bad things are probably going to happen to that dude.


4) Tell us more about this Kickstarter project. How can GHA fans get involved?


What I need from everyone is to help spread the word. That's how GHA has survived up until this point is from fans spreading the word. The best part of my Kickstarter campaign is that the 180 page hardcover is completely finished. All I need is the funds to print it and then it's going to press. I wanted to cut down on the turnover time from when a project is funded until the rewards are actually received. I'm not into the whole, "Give me money and then in three years, when I finish drawing it, you might get a book." I think that could be a huge downfall for Kickstarter so I'm "completely" trying to avoid that.

There are a ton of really fun new incentives on the Kickstarter for people who like GHA. I also wanted to make sure that fans who have the single issues or who have read it all on the web would have a ton of new material to look forwards to, thus making buying the book worthwhile.


5) What are you reading these days? Who in the world of comics influences your work the most?


Currently I read a handful of Image books like "The Manhattan Projects," "Saga," "Hoax Hunters," and "Revival." The only super hero stuff I still buy and read is Daredevil. I also really like what Francesco is doing on "Black Beetle"... that guy's awesome! Honestly, there isn't anything coming out today that really inspires me idea-wise since humor is all but dead in comics—which is total bull shot— but some of the art out there is just fantastic. Fiona Staples makes me want to color something every time I look at her work. Recently I've just been really inspired by following artists on Instagram, and following their process shots. What a cool tool to experience art in the making! 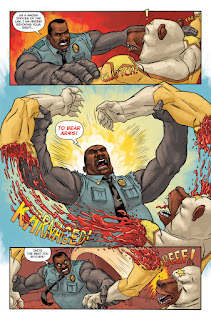 
Well I'm drawing a couple of fill-in issues of "The Manhattan Projects" so Nick Pitarra can get some sleep for once. The first issue I'm doing comes out next month and the other is number 15 which will come out at some point. After that I am taking over the art duties on "Bedlam" with Nick Spencer. That will start with issue 7 in May. No Carl Winslow in Manhattan Projects, but keen eyed viewers will catch some other Ryan Browne references. As far as sliding him into "Bedlam"... there sure are a lot of cops in that book, aren't there?

7) I live in South Korea and am currently having some major God Hates Astronauts related life issues. All three of my GHA shot glasses broke during soju parties, and a girl who spilled Guinness all over her shirt "borrowed" my GHA t-shirt and wore it home. It's highly likely that I will never see it again. How can our readers get that God Hates Astronauts swag online, and do you ship internationally?


First off, clearly you need to get your life together. Second off, luckily for you, I do ship internationally. The GHA Kickstarter features three different T-Shirt designs for your torso to be wrapped in. After the hardcover comes out, I'm going to make an official store to order swag from... currently I just have a few issues up on ETSY. Keep your eyes peeled!


We want to thank Ryan Browne for taking time to talk with us about his new project. Go to Kickstarter (http://www.kickstarter.com/projects/1334937359/god-hates-astronauts-the-completely-complete-editi) and get in on the action right away. I know for a fact that all three HCB writers will be right behind you. It's hitting the web on Monday. You know what to do.

WRDJ
Posted by The Hammond Comics Blog at 9:54 PM