Tales From the Dollar Box


This past week my LCS found itself without power due to a massive storm that knocked out electrical service for some 80000 people, according to one report.
More importantly, I was unable to throw money at my comic shop in exchange for the contents of my hold box. Undeterred, yet mildly pouty, I vowed to find somewhere to buy comics. Luckily the mall down the road had power, and in the aforementioned mall is another comic shop. Ignoring the racks of new releases, I jumped headlong into the longboxes of back issues they offer, most of which can be purchased for one American dollar.
Oh, the treasures...
I found Garth Ennis' Punisher: The End (art by the always amazing Richard Corben), several issues of Grant Morrison's JLA run, some issues of Powers, some Atomic Robo, and the Holiest of Holies, the first issue of Alan Moore's dystopian Miracleman reboot from 1985.
I also picked up some other interesting tidbits... 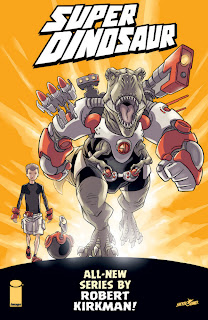 I first became aware of this book at a Free Comic Book Day event where the iconic image of a T-Rex in battle armor immediately grabbed me. Moreover it was the image of the T-rex's tiny and oft-ridiculed arms controlling the battle suits bigger arms via joysticks. The imagery was superb, but I ended up passing it over for a Mouse Guard book or some other freebie.
This past week I picked up the first two issues of the series. Super Dinosaur tells the adventures of a boy genius and his best friend, the titular Super Dinosaur (or SD, as he's called in the book when brevity is an issue). The boy genius is named Derek Dynamo, and his genius father discovered that the earth was hollow, and at it's core was a new mineral resource and a whole mess of dinosaurs. The father, aptly named Dr. Dynamo, has a parting of ways with his evil former partner and now they battle for supremacy over this new mineral.
At first, I didn't care for this book as much as I'd hoped. I figured dinosaurs + super science was a guaranteed win, but I didn't really care for the art (apparently Howard can draw some wicked dinosaurs and super science, but not so much people and backgrounds). The scripting and dialogue was fairly juvenile, rife with "awesomes!" and "s'ups?" and the like.
Then I realized I was completely over analyzing a comic book about a boy genius and his anthropomorphic T-Rex BFF. Kirkman is writing an all-ages book here, and as such it's not filled with subtle nuances and clever plot hooks. Again, boy genius and T-Rex fight other dinosaur-folk with names like Terrordactyl, Breakeosaurus, and Dreadasaurus. It's like an adaptation for a Saturday morning cartoon that doesn't exist, but should.
Oh, and the coloring was superb.
All in all, if I were still a young, starry eyed reader yet to be jaded by Civil Wars and Final Crises, I'm sure I'd faithfully buy Super Dinosaur. As it is, I don't think I'll be following the ongoing adventures of Derek Dynamo and SD.
But it was totally worth a dollar.


Scud: Tales From the Vending Machine #1 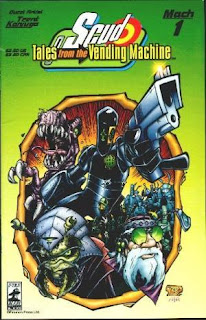 Where to start...
Scud: The Disposable Assassin is an indy book that one should pick up based on name alone. It takes place in a bizarre sci-fi future that could very well have been dreamed up by Terry Gilliam. In said future you can purchase assassin robots out of vending machines and upon completing their mission, aforementioned assassin robots will self destuct.
Thus we have the framework for Scud: TDA. Tales From the Vending Machine was a spin-off book that dealt with other stories and goings on not covered in Scud's main title, and this particular issue dealt with a midget named Mr. Bigs who was a developer of Scud assassin robots in the employ of (wait for it) Scud Co. Mr. Bigs gets fired by his insectoid boss and vows revenge by reprograming a Money Series Scud to eliminate all other Scuds and his former boss.
Mr. Bigs' boss finds out, and sends his own Sniper Scud to eliminate Big. Most of the book contains mindless, cartoonish violence begat by assassin robots on other assassin robots, and I loved it. It's very tongue and cheek (apparently in the Scud universe the form of currency is the Frank, which is a coin bearing the stately image of Frankenstein's Monster. Scud robots cost three Franks out of the vending machine, by the way), and the Money Series Scud talk enough shit throughout the book to make Deadpool envious.
And at one point he encounters a zombie tyrannosaurus Rex (Including the Super Dinosaur review and the Flesh review from 2000 AD, this marks the third time a T-Rex has been featured in my column. This is not planned).
The book's a great ride, and I learned that the entire Scud run (24 issues plus the odd one-shot) has recently been collected in an omnibus. It's probably worth picking up for sheer "wtf?" value, if nothing else.
I mean, the book ends with the Scud Co. headquarters blowing up and a caption that reads, "everytime a building explodes...a clown loses the squeak in his shoes".
Wtf?
Posted by The Hammond Comics Blog at 6:07 AM