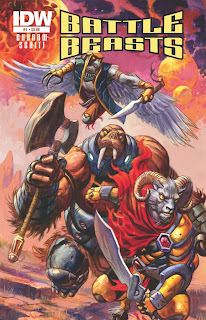 Way back in April, I was walking the isles of the exhibit hall at C2E2. Some guy was handing out free fluff and like most fan boys I gladly palmed the mass of cards, fliers, and such. As I began searching through my newly acquired treasure, it went something like this: trash, crap, trash, more crap, blah blah blah, trash…..holy shit! There at the bottom of all this rubbish was a mini comic of Battle Beasts. I have to say, my buds and I had a great time at C2E2 and scoring this little gem just may have been my highlight. Well, hell, it’s all downhill from here, we might as well go home……needless to say, I have been waiting rather impatiently for the release of this series and now it is here. It turns out that it will only be about a four issue run, but let me tell you four issues of Battle Beasts are way better than zero.

I’m sure most of you owned or played with the Battle Beasts action figures in your youth. If not, then you had horrible parents and no matter what they say, they really don’t love you. In case you have no idea what I am talking about the Battle Beasts action figures were two inch tall anthropomorphized animals complete with body armor and weapons unique to the animals they represented. They each had heat sensitive badges on their chests. You would rub them and either reveal fire, wood, or water. It was then kind of like paper-rock-scissors (i.e. fire beat wood, water beat fire etc.) There were however a few extremely rare beasts who sported the sunburst badge and they ruled all. Many a mighty battle was waged on the floor of the living room in my parents’ house. I can picture most of my highly prized beasts in my mind today. There was the lion with the eye patch named (drum roll) Pirate Lion, Horny Toad, Blitzkrieg Bat, and Cutthroat Cuttlefish just to name a few. My two favorite were the green snake guy and the grey and purple spider….they were the leaders of the badies…..always.

Okay, back to the comic. We are introduced to a trio of hero adventurers on a quest to find the fabled Dread Weapons. The Battle Beasts are forever locked in a timeless battle to the Death. Our trio of heroes seem to believe the Dread Weapons can actually bring an end to his war. It seems to be Merk (Falcon), Gruntos (Walrus) and their leader Vorin (Ram) vs. the world. Our trio is viewed by both sides of the war as traitors because of their refusal to fight for either side. I accept this. The Battle Beasts have located the Dread Weapons on planet Earth, Shortly after making land fall the “badies” start raising all kinds of Hell. Vorin and his friends are perhaps Earth’s only hope. It will undoubtedly be a action packed race to find the fabled Dread Weapons.

My biggest problem thus far has been choosing a side…I mean sure you want to root for the “good” guys but the beasts on the “bad” guys roster are so much cooler with hammerhead sharks, grizzles, spiders, and crocs…the flying squirrel could have stayed at home however.

This first issue is cover to cover non-stop action as it should be. I am so looking forward to the following three issues and you should be too. IDW hit a home run with this one. Between Curnow’s writing, Schiti’s (do you see this) art, Claudia Sgc’s great color work, and the Battle Beast’s themselves, you really can find no fault. 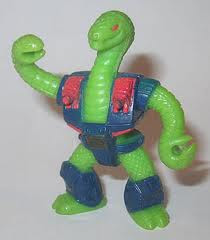 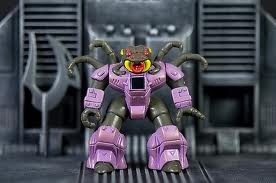 Posted by The Hammond Comics Blog at 11:07 AM