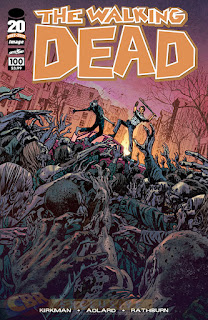 Nine covers and months of buildup by the creators in Letter Hacks, and issue 100 of The Walking Dead has finally arrived. The series has seen many hills and valleys in it's storied run, but most of the hills have been just incredible. They redefined the genre, the zombie tale, and the world of comics. Arguably the best, and my personal favorite story arc, has been issues 62-66: Fear the Hunters. The sickness, the depravity, the cannibalism; the embodiment of everything great about the franchise, can be found in these five issues. At the end of 66, I wanted to stand up and cheer. But something has been missing since then. There have indeed been a few shocking twists and turns, but the story has been excruciatingly slow; the payoffs less gratifying. Slow to the point where The Walking Dead has been living off Fear the Hunters, The Governor, and other classics that cemented it's reputation as a horror staple in comics for longer than I care to remember.

One of the most entertaining parts about the book itself is the letters page. Many collectors will forgo the trades and actually hunt down every single copy (myself included) to have a record of all the hilarity found in Letter Hacks. It's the best letters page in the business even in the worst of times. But the fans are merciless, and their scathing feedback is countered and quipped upon and dismissed by Grace and Kirkman. Their most popular argument against criticism that the book is "slow" is that there needs to be down time in order to develop the story.

But too often recently, the payoff has been major characters getting maimed or killed. Albeit a page turner at points, the classic arcs of this tale were so much more than the death and disfigurement of Walking Dead staples. Fear the Hunters was so archetypical of great, classic storytelling in any medium. It was gory, but with the blood and guts came real human moments as well, disarming the reader, and then completely knocking them on their ass. That has been lacking recently. The setting of the most recent issues has the potential for classic Walking Dead, but the execution has been off target. Kirkman boasts that 100 is projected to be the highest selling comic of the year. But show me a storied comic book franchise, and I will show you multiple fanboys lining up to buy all 9 covers including the ten dollar version with the chrome inlay.

Negan has his moments in this one. While the depravity of the Governor in this new villain has not yet shown it's face, his personality is definitely engaging. Amidst his eenie-minie-mo sequence with a barb wired bat named Lucille, Kirkman takes a few well pointed and direct shots at popular fan criticism, and it made me laugh. Adlard adds arguably the most gruesome and jaw dropping page in the history of The Walking Dead...ever. Glenn muttering the first syllable of Maggie's name like a stroke victim with his skull smashed and his eyeball dangling from the socket is something that you cannot un-see. His final scream before his skull is completely flattened is forever seared into my brain, it was like a truncated last scene of Braveheart on PCP. This praise comes with a caveat however, because the death of Glenn was the most predictable major event in the history of this series. And it is a sad state of affairs when a book that prides itself on not being predictable is ruined by so much lazy foreshadowing. As soon as Glenn proclaimed he was leaving the group in 99 I knew Kirkman had signed his death warrant. Others fans I knew predicted it as well, very un-Walking Dead like.

As the TV money tsunami continues to make the television show the main focus of the franchise, and new fans are wooed by The Walking Dead stories of yesteryear, the old hat legions will pine for the glory days. Even if Kirkman and Co. continue to churn out mediocre issues month after month, there is no way that this book will ever leave my pull list. The highs were just too damn high. But hope is fading. For every nine cover release event, there are countless preceding months of apathetic, moot cover art contributions half covered in text (yeah, it's called Something to Fear, we fucking get it guys). The stories will drag, and the fans will happily lap it up, bitch about it at their local shop, and threaten to leave the book in Letter Hacks. There is a formulaic quality to latter day Walking Dead stories that has been beat to death: "No one is safe...blah blah blah." It is now up to the creators to confound those expectations, because most of us kool-aid sipping fanboys will be there for every yawn, every let down, every excuse, but will still go to the comic store every month hoping for something better. Here's to hoping that Robert Kirkman steps his game up. I'll drink to that.
Posted by The Hammond Comics Blog at 5:56 PM