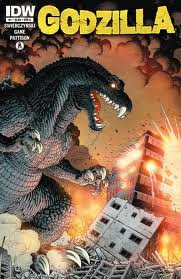 Mexico City. This is supposed to be the happiest day of Urv’s life. Urv and Eduardo have just been united in holy matrimony, but alas, this man love is not to be, so sayith Kumonga. The giant sized tarantula comes smashing through the church’s wall wreaking havoc and spewing webbing. Urv, seeing his “bride” webbed and smushed, vows his revenge and seemingly pulls a gas can and propane torch out of nowhere. It goes boom and Kumonga slinks off.

We get our first glance of the star of the show on pages five and six in an amazing two page spread complete with flying doves and lightning strikes. Godzilla had chosen Washington D.C. to lay waste too. At this point, I was getting really excited; we’ve got Kaiju raising hell all over the place. Then I turn the page and there poaching eggs is a Jason Statham clone named (sigh) Boxer. Boxer is a professional soldier and an amateur cook? Boxer’s one page of egg poaching Zen is interrupted as we’re once again graced by Godzilla laying waste to D.C. The rest of this issue follows Boxer trying to escape the destruction that is the king of Kaiju. The last page is filled full of cheese as Boxer pulls out his smashed cell phone “oy Urv, whatcha doin’ this weekend?” Fade to black. 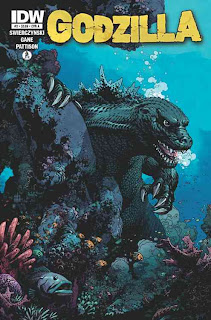 Godzilla’s made his way to Pittsburgh. Kumonga has crossed the U.S. Mexico border in Arizona. We are graced with our first glimpse of Anguirus laying waste to Edinburgh, Scotland. He actually topples the clock tower over Waverly station which both saddened and caused me to squeal in delight because I have actually been there.
Boxer shows up with his handpicked gaggle of “specialists.” Urv, Harrison who was driving in the race in Brazil that Rodan terrorized, and Boxer’s ex Claire.
The rest of the issue is all “monster slayers” vs. Anguirus. Resistance is futile. I have to say, I was hoping for a little bit more monster on monster action, not this whole “monster hunter” nonsense. So, I guess on that front, I was a little disappointed but all in all, not a bad read and the art is above average. I’m not sure how many issues of Godzilla I’ll be buying, but I know it will be as many as it takes for King Ghidorah to show up………or at the very least, Mothra and her two Shobijin. I hope someone eats Boxer and his band of mercs soon, then we can get down to some real Kaiju Fu.

Posted by The Hammond Comics Blog at 3:47 PM