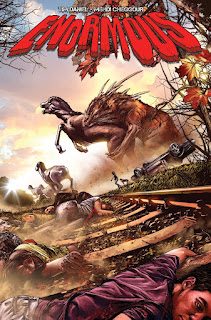 After having read a solicit for the Enormous one-shot I immediately took it upon myself to order this book. The synopsis alluded to the last vestiges of mankind battling for survival against gigantic monsters in a post apocalyptic earth, and this seemed like a solid win. I preordered the book, promptly forgot about it, and was pleased as punch when it appeared in my box at the local comic shop. The cover shows a lone woman crouching amongst the ruins of a city as a herd of 20 story tall mutated ibex creatures thunder overhead, and I cracked into it, eager to see pages filled with gritty sci-fi survivalism.

I was mildly disappointed with the results, however.Enormous is set in an indeterminate time in our future, 17 years after the inception of something called the Alchem System and 1 year after E-Day, the day the human race became largely extinct. A lone survivor makes her way through the ruins of Phoenix, Arizona on a hunt for other people who have escaped death. Early on I was treated to a splash page of a towering praying mantis crashing through the city and was quickly reminded of the film Cloverfield. Curiosity piqued, I continued.

Disappointingly, Enormous soon devolved into a formulaic and all too familiar plot involving 2 groups of survivors, one altruistic and good-hearted, and the other representative of the archetypical marauder villains one finds in a Mad Max film. Characters are poorly developed, if at all, and the gigantic monsters of the book serve mostly as window dressing. What was most frustrating to me was the seeming lack of direction and backstory for the event that caused the human races nigh-extinction or why giant mutated beasts roam the earth. It seemed like Daniel was attempting to write a story of human survival against the backdrop of an extinction level event, but just fell short. I was utterly uninterested in any character, their motivations, or their survival. Most of the time I was rooting for someone to get eaten by a giant lemur or trampled by a mutated elk. Eventually we are graced with the reason giant lemurs and mutated elk run rampant through the streets, but it's almost a footnote in the book that comes too near the abrupt ending for me to care at that point. I was hoping for a different take on the kaiju genre, but instead of Gamera Versus Barugon I got a halfhearted pastiche of Cloverfield and The Mist.

The real (and possibly only) saving grace of the book was the outstanding art by Mehdi Cheggour. The creature designs were excellent (if underused) and the characters and backgrounds were very well illustrated, invoking a style very reminiscent of Jay Anacleto.

All in all, it felt like this should have been a miniseries or a trade paperback with a larger page count. The writing was rather scattered and nonlinear, and the art could not salvage what I hesitate to call a train-wreck, but if the shoe fits...

Other than the art, my favorite part of Enormous was the oversized format of the book. Aptly named, the book measures probably 12"x18". I loved that marketing tool, as it immediately draws your attention and keeps it.

In the end, clever marketing and good art couldn't salvage what could have been an enjoyable read. With any luck Tim Daniel will continue honing his writing skills and produce something truly enormous. Until then, I hear IDW is putting out a fairly entertaining Godzilla comic...
Posted by The Hammond Comics Blog at 9:32 PM