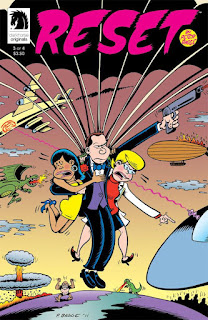 Dark Horse has something with their new line of creator owned fare aptly titled: Dark Horse Originals. And if you are a fan of Peter Bagge and his misanthropic anti-heroes, Reset is going to be something that you will want to own. At one point I had every issue of Hate (first edition) in my collection, but when my house was burgled back in April, they were stolen and are now probably in some southside Chicago pawn shop going for a dime a pop. What is the renter's insurance value placed on a lifetime's worth of collecting? About $7400. The myriad of lessons I have learned from this experience abound. One: Insurance companies do not collect comics. Two: I was NOT in good hands with Allstate. Three: Saving a few bucks by living in a dangerous, depressed, lower class neighborhood/ethnic ghetto is not a wise move. Four: Not all comics are created equal.

I discovered that many of the titles that were lost to me forever, I never would have read again despite my best intentions. My extensive Superman and Batman collection is gone, and thinking about all of the time wasted scrounging through long, white cardboard boxes for missing back issues is indeed a most painful memory. But now that they are not with me anymore, a cloud was lifted from my brain. I was never a fan of Snyder or Hurwitz, and their work on Batman left me less than impressed even before the robbery. But bottom line is that these are simply not stories I really care much about anymore. After three more months of floppies, Superman, Batman, and Detective Comics are off of my pull list for good. The only supe titles I still carry are Justice League, Action Comics, and Animal Man. All of them are quality, entertaining reads that I would miss, especially Animal Man. Buy Animal Man. This has also freed up extra funds to try some new stuff every week as well. My Peter Bagge collection however, chock full of acerbic antecdotes and mysogonistic tales, is a huge loss and will be hard to replace.

That right there is my justification for the previous rant. Feature writer and supe enthusiant Will Dubbeld and I were engaged in a heated internet discussion about the quality of recent Image books. I'm pro, he's con. I remember him saying something to the effect of (paraphrase): "I won't take a lot of chances on Independent stuff, but I'll purchase almost any comic with Batman or the X-Men on the Cover." After a lot of soul searching I realized that I am the exact opposite. As much as I love the sliver age greats, a select few superhero trades (Red Son, Dark Knight Returns), my tastes now tend to gravitate more towards independent books. But as vapid and hollow as the majority of modern superhero tales can be, independent books are not always 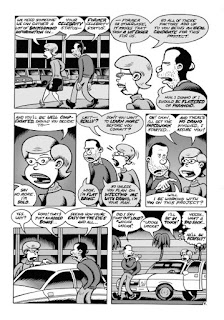 artistic,under-appreciated masterpieces, that's a fact. At a huge comic shop liquidation event last Saturday, there were endless rows of boxes that littered the hot sidewalks outside of a local haunt. I ended up purchasing about 50 books, not being very choosey about the content considering they were literally the price of a gumball. Any independent book I came across found my way into the stack. I drank from the goblet of glory as I made my way home with my newly purchased, field dressed stack of indies. The first book I opened was called Dripped. It was a 26 page book of muddled, confusing art with no dialogue that was pretty worthless besides a decent cover. On the back I noticed the price: $6.99. And another gem just below: "Paid for by a Grant from the National Endowment of Arts". I just had to laugh while picturing a Republican house member waiving this book over his head as concrete proof of our liberal "tax and spend government". Reset is no where near this category of awful; an example of indy books made good. If any comic creator should be subsidized by the federal goverment, it should be Peter Bagge. There are a ton of great indy books out there, but there are admittedly some bad ones as well.

While Hate leans more toward a dark, overtly cynical version of Seinfeld (a comic about nothing). Reset is all of the Peter Bagge, with a sci-fi plot. That speaks to me. Guy Krause , washed up movie star with enough artistic integrity to not cash in on the reality television fad, is approached to be the subject of a psychological experiment. He is able to virtually relive moments from his past and change the outcome. This is not a very innovate theme, but the atypical plot twists through the first three issues have been hilarious and entertaining to say the least. There is no predicting how this one will end. The series seems a little rushed in spots,and Reset could have gone 6 or 9 issues easily. But Bagge's commentary on pop culture and sharp, edgy dialogue separate this one from every other creator out there right now. The art is as distinct as any found in comics, and I can recognize the work of Bagge as easily as I can the work of Crumb or Kirby. So if you are tired of Owl Man and The Phoenix Five check out Reset. Creators like Peter Bagge embody everything I love about independent comics. Keep these originals coming Dark Horse!


Check out this sweet variant cover of issue one by Matt Kindt: 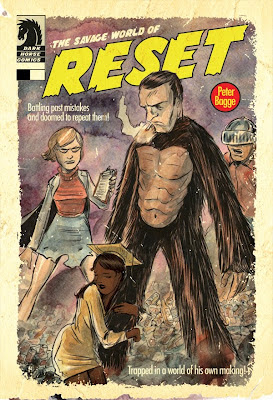 Posted by The Hammond Comics Blog at 7:13 AM