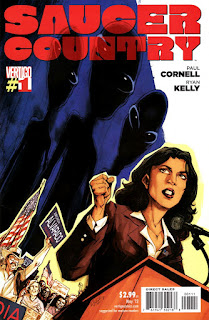 The tagline for Saucer Country was X-Files meets The West Wing. That being said, this book went onto my pull list immediately. I've never been that huge of an X-Files fan, but The West Wing is my favorite television show in the history of the world. There is a lot about The West Wing to love, but what stands above the acting, sets, and production value is the writing by television and film journeyman Aaron Sorkin. He is arguably the best writer in both genres. Comparably, Paul Cornell did not even come close, but that was to be expected. Although the description by Vertigo is a mash-up of two fan favorites the idea turned out to be pretty innovative all things considered.

Ryan Kelly does a serviceable job on the art, and while the writing is not a masterpiece in issue one, it also manages to get the job done. There are not too many politically themed comics these days, and the idea is what makes this one stand out. A lot of issue ones tend to be merely set-up work, and are kind of a worm on a hook to get fanboys to include them in their weeklies. Saucer Country manages to transcend my admittedly cynical views and turns out to be a pretty entertaining read. I also grabbed Voodoo Child, the other Vertigo #1 that came out at the same time and in contrast to that book this one did a much better job. Issue two needs to do a slightly better job of getting the reader emotionally invested in the characters. The plot was very engaging, but it was the only standout. The idea of a book following the campaign of the first Latino woman American presidential candidate accompanied by an alien invasion is just too good to pass up. If Paul Cornell can take some ques from Sorkin this one might be alright in the end. And Saucer Country comes along at a great time because Vertigo needs a real kick in the ass at this point. Image seems to be dominating the adult themed independent book genre lately even though Vertigo was the company that pioneered the concept in the mainstream. Sweet Tooth and The Unwritten are the only two other books I have taken an interest in as of late.

Do not misconstrue my words here. Saucer Country could turn into a really good book, but at this point it's not going to put Vertigo up on it's shoulders and carry the DC subsidiary into the 21st century. As much as I love Willingham, the last thing this company needs is another Fables spin-off book. Creativity has been in short supply lately, but that is not surprising considering Image lets creators keep the rights to their stories and characters. The Stan Lee era of raping and pillage starving artists seems to be over in comics and that is a good thing. I would hate to see the doors close at Vertigo, and if Saucer Country can live up to it's potential Vertigo is a little closer at getting back that top spot. This one is kind of a wait and see, but unless something catastrophic happens it should and will turn out to be a good read. There is even the potential to confound expectations but right now it is just too early to tell. Issue one is well worth the cover price and this one went on my pull list. That in itself is a victory considering there aren't too many other titles from the Vertigo family that can currently cliam that distinction.

By: William R. Davis Jr.
Posted by The Hammond Comics Blog at 6:51 AM