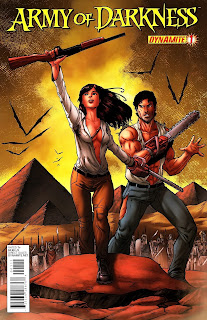 The Army of Darkness was the third movie of the Evil Dead Trilogy. I’m sure that everyone already knew that, I mean I assume most people living in the civilized world have seen or at least heard of the Evil Dead movies. If neither of those assumptions are true, I’m sure you’ve at least seen the provided movie poster before. In my humble opinion, one of the greatest movie posters of all time. Ash, portrayed by Bruce Campbell, standing triumphantly in tattered cloths. Iconic Chainsaw hand prominently displayed in all it’s glory. I’d have to guess that most fans of the Army of Darkness movie are fans because of that hand; I know I am. Seriously what’s not to love about a good guy with a chainsaw for a right hand? I mean that stuff is usually reserved for the bad guys, right? Army of Darkness is, in my opinion, hands down the best of the three movies. The first two had more violence and gore but Army of Darkness relied more on slapstick. It truly could be considered the greatest horror comedy of all time.

Oh yeah, the comic. When I saw this book on the shelves of my local comic emporium it was a no brainer. I didn’t even hesitate. Would it be the same old adventures of Ash from the movie or would it be something completely different? That is the first thing that jumped into my brain when I saw it.

It turns out Ash doesn’t even make an appearance in the book, not in the first issue anyways. That I found a little disappointing, but at the same time it was refreshing to see Serrano go in a totally different direction. The new leading ladies name is Fish. Sort of the same beings as Ash’s story as she is a slave in the past as well, this time in Egypt. The Darkness has taken her hand as well. Unlike Ash she didn’t cut off her hand, instead she uses it as a weapon. It seems the darkness can change from a bloody stump into almost any form of weapon Fish so chooses. So good for Serrano for not giving her a chainsaw and going into a new direction. Did I mention there are humanoid bug like aliens?

Overall, the writing was okay but nothing special. How much can I really tear into it after only the first issue? Not a lot I guess. The art is a total different story. Sorry to say, I found the art uninspiring and rather bland. Such a disappointment. The cover was more of the same. I don’t really get why they would put such a blah cover on the comic. And another thing, why put Ash on the cover if he’s not in the book? Just another cheap ploy by some Ivy League goon to get you to buy comics. I understand Dynamite doesn’t have the cash that Marvel and DC may have, but come on, get serious. You are, after all, representing one of the most iconic tales of the free world.


Madman.
Posted by The Hammond Comics Blog at 5:23 PM