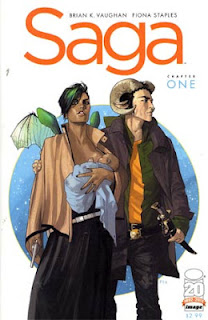 One of my favorite writers has returned. That’s right people BVK is back. Vaughan’s Y: The Last Man, Runaways, Pride of Baghdad, and Ex Machina are some of the best comics I’ve ever read. It’s safe to say that only after one issue the Saga series will no doubt find a home on my favorites list. Vaughn has also worked with Marvel and DC on titles such as Swamp Thing, Wolverine, Ultimate X-Men, JLA, Green Lantern, and Detective Comics but it is this work on his own created books that his mastery of all things comics shines through. If you haven’t read Y before then you might as well stop pretending you’re a fan of real comics. Think about that the next time you’re in your comic emporium picking up your new books. While you’re spending your hard earned money on your sub par books that you gobble up like crack. That you could be reading something that actually deserves to be read and snuggled with on those lonely nights. Seriously though, if you haven’t read any BVK titles before you are missing out in a big way.

The story cuts in with Alana delivering Marko’s baby. Alana is a winged one from the planet Landfall and Marko is a horn head moony from Wreath, Landfalls only satellite. The two races are locked in a bitter war. The moonys are more magic based and the Landfallers are the Tech heads.

The powers that be, from both sides, want the couple arrested and the baby destroyed. Marko and Alana flee with the baby with a mysterious treasure map in hand.

There is also a race of humanoids called Blue Bloods that have TVs for heads. I have to admit I’ve never seen anything like that before but I like it.

The way Vaughan’s writing and Staple’s Art blend science fiction and the fantastical makes a strange marriage seem natural. That says a lot because there have been many who have tried this but they always seem to crash and burn. The balance of Saga is perfect and well thought out. BKV and Fiona Staples have created something that’s sure to please factions of both the Sci-fi geeks and the Mr. Wizards for hopefully a long long time. Just remember buy your own copy because you can’t read mine.

One of my favorite details of the writing is how the baby born within the first few pages, narrates the book from sometime in the future. I also like the fact that Saga was a double sized forty page book with zero ads and it only cost three bucks. It seems that someone’s priorities are in the right order. Do yourself a favor and get this title on your pull list before it too late and you fall behind and become the laughing stock of the fan boy nation.


By: Cody Miller
Posted by The Hammond Comics Blog at 3:03 PM