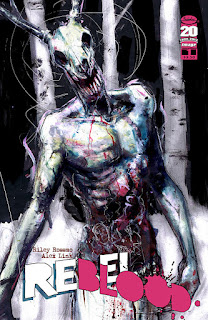 First let me say that I’m a sucker for a good zombie. Give me a zombie before any other horror suspect on any day of the week. Zombies are “king” of the mountain that is pop culture at the present. For any true zombie fiend its Walking Dead first and foremost these days and rightfully so. I don’t think I’d be far from the truth by saying that solely based on the success of the Walking Dead comics and the television show that everyone is trying to shove zombies down our throats. Is that a bad thing? I mean sure, you have to sift through all the B.S. to find the few titles that are worth reading. That being said, I might be just a little bit biased.
I knew as soon as I opened the cover and say two Zombiefied birds picking at a severed (or rather half eaten) human head, I was going to love it. I was not disappointed as the reader is thrown head first into a five page battle to the death. Man with shotgun vs. zombie wolves from hell. The man is Chuck. He is a man whom had his problems just like everybody else and I’m not just talking about savage zombie wolves. Chuck’s a fireman that’s been banished to a remote fire tower in the middle of BFE. Everything goes mutant zombie and now Chuck must get home to check on his family. So begins the odyssey of Chuck “the fireman with a shot gun.”
In all fairness I liked Link’s writing and loved Rossmo’s art. The art is the selling point. It’s kind of cartoony and sketch like but in all the right ways. The very last page of this issue is probably the most disturbing thing I’ve ever seen in a comic book.
I won’t say what’s on that page but trust me check it out for yourself. As far as Riley Rossmo’s zombies go they’re pretty unique. There were a lot of well drawn animal zombs. All the zombies, animal and human, have exposed brains. There is a “thing” complete with deer skull and antlers for a head and last but not least, the three-eyed owl rapping at Chuck’s window. The Zombies gets a 7.


Madman
Posted by The Hammond Comics Blog at 5:15 AM