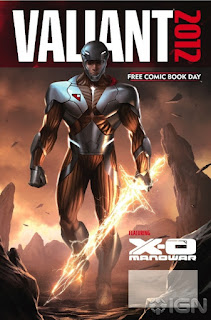 I'd read in Previews that Valiant Comics was attempting a comeback, and was understandably underwhelmed. Valiant Comics was the brainchild of former Marvel mogul Jim Shooter, disgruntled and itching to unhorse the Big Two with gimmick covers, mail-away offers, and books penned by former members of the Marvel Bullpen.
Surprisingly, Valiant came close to doing just that in the freewheeling early/mid 90s with their licensed properties from Gold Key comics, amongst them Solar: Man of the Atom, Turok: Son of Stone, and most notably Magnus: Robot Fighter, a guy with a man-skirt short enough to give The Watcher pause. I admittedly bought quite a few Valiant titles in my younger days but my interest in them waned as I got older.
Not grown up. Just older.

Valiant was purchased by Acclaim Entertainment of Mortal Combat fame, who soon discovered it was easier to uppercut Johnny Cage than to make decent comics. They soon discontinued the comics and were bankrupt by 2004.
I'd always looked back on those Valiant titles and chuckled, chalking their purchase up to the folly of youth. Consequently when my compatriot B. Hines returned from the Chicago Comic and Entertainment Expo and handed me this Valiant preview comic, that underwhelming feeling returned. Never one to turn down free stuff however, I took the book and gave it the once over. Both previews were for relaunches of old Valiant books, specifically X-O Manowar and Harbinger.
X-O Manowar was a book about a Visigoth named Aric who was abducted by aliens in the 5th century, steals a symbiotic boimechanical super suit from same, and ends up in modern days due to time dilation...or hyperspace worm hole...somethings. It didn't matter, I used to love this book back in the 90s. It was like Conan with Guyver armor. The preview is 6 pages in length and does not waste them. It uses the inside front cover to tell you some interesting factoids on the Visigoth people and their Roman foes, a brief timeline and small map, and a "previously in X-O Manowar" snippet to bring you up to speed. Did you know that horses were revered in Visigoth culture? I didn't. Thanks, Valiant!
The actual story begins with Aric and his plucky band of Visigoth warriors sneaking up to an alien ship, thinking it a Roman transport. I'm unsure how they came to that conclusion but after assaulting the guards, Aric and his men are bested by the aliens and taken aboard ship. They meet up with an alien fleet and are off to parts unknown, leaving the reader to wonder as to what the fate of Aric will be.

The script was written by Robert Venditti, whose work I'm unfamiliar with. He wrote The Surrogates, which was made into a Bruce Willis flick, if that gives anyone a basis. The art was by Cary Nord, who's not had much in the way of high profile work either. Both the story and art were decent, but not mind blowing. The designs of the aliens and their spacecraft were solid, however.

The second preview was for the Harbinger relaunch. I'd never read Harbinger, as it was about a group of super powered teens with an older psychic mentor figure fighting against evils in a world that fears and hates them.
Sound familiar?

The preview is bookended with scenes of a young man walking through a busy street surrounded by the thought balloons of his fellow pedestrians. The interior is a flashback involving a psionic Asian fellow (the younger self of the aforementioned mentor figure) seeking out a monastery with a stigmatic monk prophet, seeking answers about his future. The monk's cryptic answer leads you to believe the young man from the beginning of the book and the interior character are interlinked, destined to be part of a greater story.
One that's on sale in June...

Joshua Dysart scripted, and having written Violent Messiahs, Swamp Thing, and Unknown Soldier amongst other recognized work seems well suited to help Valiant successfully jump back into the comics biz, and Khari Evans' art adds fairly good atmosphere though I didn't think it was as crisp as his work on Daughters of the Dragon or The Immortal Iron Fist. There's an okay action sequence in the flashback, but the backgrounds and layout really make this one work.
Reading these two sneak peaks, I will admit, piqued my curiosity. X-O Manowar ships in May, Harbinger in June, and nostalgia bolstered by what could be some promising writing might just see me eating my words about not buying any of the new Valiant books.

By: Will Dubbeld
Posted by The Hammond Comics Blog at 2:44 PM