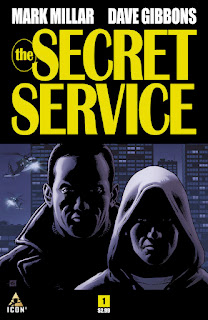 From 0 to 60 in one page. By page two I had fallen in love with Secret Service. Page five made me realize that I need to read as many Millar books as I possibly can in this lifetime. The CEO of The Hammond Comics Blog, William “Dollar Bill” Davis has been telling me that I need to read Kick-Ass, also written by Millar. That would be a good place to start, I would think. Now I believe I must and here’s why…

I was still in shock long after I read page five. I had to reread page six to the end. All I’m saying is find me a better page five and I’ll eat it.

The art was somewhere safely in the middle of the road. Maybe Dave Gibbons knew that after reading page five no one would remember his art work anyway….

Wait. Hold up a second. I went to two different Marvel panels at C2E2 on Saturday. One was about Spider-Man and the other one was Joe Quesada’s “super” panel of Marvels who’s who: Cup of Joe. It was almost a complete waste of time. All the guys at Marvel did was see how many times they could say “BUY THIS BOOK” in a single breath. It was such a turn off that William and I bailed on the Spider-Man panel about half way thru. If you knew how big of a Spider-Man fan I was you would know how big of a deal that is.

What a let down. How one of the mighty has fallen. At least the Independent creators didn’t beg. They had to create books worth being read. Marvel will put its name on just about anything these days. “BUY THIS BOOK” Isn’t it bad enough that I have to deal with 4-5 pages of your propaganda every time I pick up a Marvel issue? How many times are we going to beat that horse? Don’t annoy the fanboy that feeds you. Shame on you Marvel. Shame.

By Cody "Madman" Miller
Posted by The Hammond Comics Blog at 6:15 PM