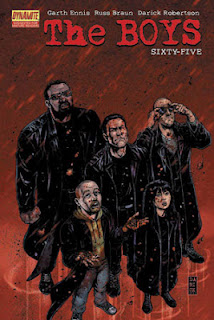 Garth Ennis has gotten quite the reputation. At this point, the man is almost like the Howard Stern of comic writers. His enemies will probably put Dynamite out of business at some point due to lawsuit after lawsuit contending that what he writes borders on pornography. And as much as I am an Ennis fan, in some cases I have to agree. Not pornography in the sense that it offends me, but after Ennis (A.E.) there will be no line that has not been Crossed in comics. This is what a lot of people know about Ennis, but what they do not know is that he is one of the best storytellers in the game today. Preacher is my favorite series of all time, and although pseudo-religious apocalypse stories are in high supply, Ennis was the first writer to take the torch from Gaiman and create a world so stunning, so shocking, so different, that the medium will never be the same again.

After 65 issues of The Boys, it is easy to say that without a doubt this is the series that will continue that legacy. Crossed and Jennifer Blood were both entertaining and well done, but The Boys has characters that matter to the readers, the world has it's own mythologies, and it is gorier and more shocking than almost anything he has written to date. With the final story arc about to start, I really can't say enough how much I love these books. And the best part is that the series is peaking right now. Each issue keeps bringing something new to the table, and it is one of those books that I look forward to each month, a book that has the power to turn even the shittiest of Wednesday's around.

The Boys are a group of clandestine Government employees that police a group of superheroes that were created by corporations to turn a profit, a core of "heroes" that are corrupted and awful and detrimental to the continued existence to humanity. Comic books are propaganda that paint the supes in a positive light, and The Boys are the only thing between them and an unsuspecting public. 65 was as good as Ennis gets; even if you haven't read a single issue of The Boys you would enjoy it immensely. They were on a tear of great covers, but this one is uninspired and average. That is this book's only flaw, but it is a minor one. This 5 dollar 36 page end of a major arc will be the best thing that you read all week, maybe all month, maybe even all year. You owe it to yourself to go pick this book up today.

By: William R. Davis Jr.
Posted by The Hammond Comics Blog at 8:09 AM