"And I looked, and behold a pale horse: and his name that sat on him was Death, and Hell followed with him. And power was given unto them over the fourth part of the earth, to kill with sword, and with hunger, and with death, and with the beasts of the earth." Revalation 6: 8 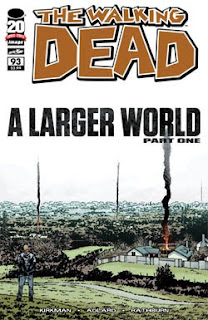 It is hard for one body of work to stand out in a society inundated with apocalypse themed tales, unless you are the best. The Walking Dead is the best ongoing series in comics, and it dominates over every other book in any other genre. It is my favorite form of entertainment...period. Every Wednesday that a new issue is released, I find myself at the comic shop as fast as traffic will permit. And I start reading the moment I arrive home. Every single issue has me laughing out loud at the letters page. The banter between the creators and the fans never fails to entertain, and I must give them credit, because it appears that the surest way to get your letter into "letter hacks" is to write the most scathing feedback imaginable. This is a far cry from the letters pages of DC, where it seems that every kiss ass idiot willing to verbally felate a DC creator can get a nod.

The book itself is more about a tale for survival than your average zombie book. Fans of the TV show who do not read the comic are missing out the most. The show is a G rated version of the book, with a different storyline and some completely different characters. That is one thing that makes them both so interesting. The show is good, but there are issues of the book that are absolute genius. The TV show is not even close to that level. And while the book will at times leave you breathless with your mouth hanging open in shock, my only criticism is that some of the issues can be and are quite slow. This is the most common complaint shared by TWD fans. Kirkman responds by saying that the quiet parts are necessary to set up the fan favorites. In my opinion, this is absolute garbage. Exposition is necessary to tell a well rounded tale, but there are a few issues that are mind numbingly boring. Fans are emotionally invested in these characters; these issues can and must be better. And although they are few and far between, I have found myself extremely disappointed in a monthly on more than one occasion. It reeks of lazy, defeatist writing, but to create something of this sheer magnitude that so many people love so much, it may be Robert Kirkman following a formula and simply being smarter than the rest of us. I'm not all that sure about this though, that the boring issues are what make the good ones so appealing. Fans of the book care a lot about these characters, is it right to be this bored sometimes? There are a lot of holes in that theory.

The creators have promised us something special building up to issue 100. Our journey together so far has seen everything from the demise of some of our most beloved characters, to some of the most gruesome deaths that have ever graced the pages of comics. No character is safe, and I cannot wait to see who are the next casualties. The only thing that will compare to the next great TWD story arc, will be the letters from pissed off fans when their favorite character was torn to pieces and left for dead. This book is consistently reinventing the horror genre and comics for that matter, and I do not expect them to stop anytime soon. The trades are a must have if you did not get in on the ground floor, but you don't get the letters page so you definitely want to purchase the monthlies as well. If you claim to be a fan of comics, and have not read The Walking Dead, I highly doubt the veracity of your claim. Can one really be a fan of comics and have not read the absolute best book in the medium? I think not.

By: William R. Davis Jr.
Posted by The Hammond Comics Blog at 4:34 PM