This week Cody (Marvel Guy) and William (DC Guy) each picked out one Marvel title and one DC Title and we decided to see where we stood at the end on each book. Hey, at least we're trying new things here at The Hammond Comics Blog. Enjoy. 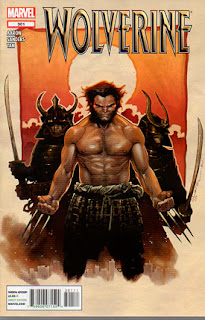 Hand Ninjas, loin cloth wearing Yakuza thugs on crotch-rockets armed with chainsaws, Saber tooth, the Silver Samurai and oh yeah, Wolverine. How could you go wrong?
No matter how off the wall and farfetched the story line contained within was, I still enjoyed myself. The art wasn’t bad and the writer really threw a lot of action in for just a single issue.
At one point, the Silver Samurai uses his suit to blast Wolverine to bits and in the following frames, his skin continuously grows back; I loved that part. Sooo cool. Over all, this book was just about how I expected it to be; lots of action and Wolverine fought Saber tooth, but doesn’t he always? I can see why you would read this one, but I’m not really a huge Wolverine fan so I most likely won’t.


Wolverine, it's been awhile. When I agreed to do this dual review thing with Peaches Miller, I knew that he would be the one picking the Marvel offering, and who knew it would be issue 301 of the coolest superhero in my fourth grade class. One of my great regrets as a collector was not picking up issue one for $20 when I was little, but that was an astronomical amount of money at that time. Not so much today. Wolverine has changed quite a bit: No Yellow Costume and no cigar. And this incantation of everyone's favorite mutant put him in the middle of a bloody ninja Japenese style movie romp. That is exactly what this one was at the end of the day. There were no ephipanies or explorations of the soul in 301, just a lot of blood and dismembered limbs. I'm sure fans of Wolverine enjoyed this book thoroughly because it was fun. The story bordered on the lame side, but the art was great for a supe book. There are still a few DC books that I would hold in higher regard artistically, but this one looked great. For a violently unapologetic read, pick this one up and give it a go. Personally, I think that there are some ultra violent books that get the job done a little better. If this is the kind of book that appeals to you, check out Crossed by Garth Ennis. That is some of the sickest shit you will ever see in print, and the story's pretty good as well. 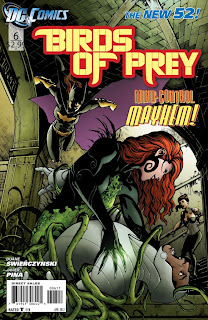 So this was my choice. I was heartbroken when Travel Foreman left Animal Man, but I heard that he was getting added on to Birds of Prey and that's why this one made the cut. The only problem is that he wasn't to be found anywhere in issue six, and that fact was quite apparent, because as far as the art is concerned this one needs a lot of help. Issue six was some of the most pedestrian art I have seem in quite some time. It could have ended careers truthfully. The story was pretty interesting, but a plot synopsis would be too spoiler heavy. The Birds of Prey have never impressed me in the past. I like the idea of them more than the actual super group. The new Birds of Prey are sans Oracle, but DC's version of Charlie's Angels managed to be a pretty good read in the end. There is nothing to look at here, but once Travel Foreman starts arting it up I'm sure I will tag along for a few more issues. Maybe there's an audiobook version of issue six. That's the one you're going to want to go with here.


I’m sad to say I just couldn’t really get into this title. It’s cool having an all-female team like this but just not for me. I’ve never read or seen much about Birds of Prey really at all. With limited DC knowledge, I was having trouble figuring out who was who. Batgirl, Poison Ivy, and Katana I know of but the Black Canary and Starling were new to me. I think my favorite member is Katana. Bat girl seemed lame. Poison Ivy was interesting with all her vines going every which way. The current story arc involves mind control. All female cast and mind control. Sounds about right. Pass.

By: Cody Miller
Posted by The Hammond Comics Blog at 3:10 PM