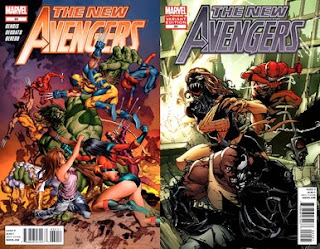 Osborn is back, and so are his Dark Avengers. Well, at least in spirit anyways. The “Iron Patriot”, and what is apparently going to be his new schtick, have returned to stick it to Luke Cage’s team of Avengers. Osborn has been broken out of jail and formed an army of A.I.M., HYDRA and former H.A.M.M.E.R. agents as followers. This issue, the New Avengers butt heads with this new version of the Dark Avengers in what will surely be an on-going series of two super groups locking horns. Bendis does his Bendis thing; nothing new or exciting.


I must admit, as a long time Spider-Man fan, I am starting to feel like Osborn is more of an Avengers villain then a web head, and this saddens me. I would really like to see him have a greater presence in Spider-man’s own book. I mean, he did steal Spider-man’s baby after all… (Yes, that’s right Marvel brass, I remember that issue back in ’96, or whenever it happened; I even have the book to prove it!) …unless, of course, Mephisto killed the child during One More Day (along with JMS’s Marvel career). Annnnnnyways, that’s a topic for a later time.


Sometimes, it’s hard to keep in mind that, to the general Marvel public, Osborn is a reformed criminal who was granted a high ranking position in the C.S.A. after his successful rehabilitation during the government’s first Thunderbolts program (after Civil War). Thanks to the U.S. propaganda machine, Stark was discredited and Osborn ascended. During the course of Secret Invasion and Dark Reign, Osborn was painted under a heroic light to the masses. Sometimes, I almost refuse to believe that the American people would believe that the convicted GREEN GOBLIN was a changed man and put in the position that he was. But then I just remember how easily people are fooled in real life, and it makes it an easier pill to swallow.


But I digress; this issue was pure set up. This is Bendis planting Avenger seeds that will later bloom into a story tree that will surely have you picking issues off it's spin-off branches within the next year. The fight scene was ok, except for one specific, stand-out moment with Skaar, Spider-man and his dialogue, which actually made me laugh out loud. The art is solid, but not Deodato’s best like his work on Dark Avengers or Thunderbolts a few years back. It just looked too scribbly at times. So, if you’re a hardcore, Marvel zombie, then be sure to read this, because it will be relevant to the overall Marvel story. If you’re not, you could probably skip it. 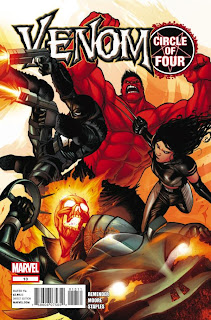 Red Hulk, X-23, Ghost Rider and Venom. What do these four characters have in common? Nothing, you say? Tell that to issue number 13 of Venom. Yes, the moment that nobody was looking forward to is finally here. They are joining up to battle the minions of Hell! And I won’t lie, I kind of like it. Allow me to set the stage for this rather awkward selection of heroes.


X-23 is hunting down a casino owner in Vegas who purchased a vial of her blood to do whatever people do with vials of blood.


Flash Thompson (Venom) is drinking his problems away in Las Vegas after deciding to go A.W.O.L. after the events in the previous issues of his own book.


Red Hulk is hunting down Thompson for running off with the government’s brand new symbiote.


And the new Mexican female Ghost Rider is getting lessons from a now powerless Johnny Blaze out in the Nevada desert.


What brings these people together? Well, a certain son of Mephisto needs to complete a fiendish ritual that literally brings Hell to Earth... and what better place to perform said ritual than Vegas? Now, I understand this premise sounds really out there, but it actually works. Each character gets their fair share of the spotlight, and better yet… the reason for them coming together is actually believable.

The art isn’t amazing, but it suits the comic well. I really didn’t care for the way the artist that drew Red Hulk’s hair for some reason, can’t put my finger on it, but that’s a nit pick. If only the cover artist had done the interior as well. It just simply looked better.


Remender gets the personalities of the characters down, and each has his own voice. However, the book does feel a bit rushed, which might have been helped by another issue. This was a rather big set up that was executed very quickly, which resulted in a very lean issue; there was no superfluous dialogue or time-wasting exposition. It got right to the chase, and when it comes down to it, I prefer the slightly leaner feel to filler issues just put out to get more money.


In closing, it was fun. It wasn’t mind blowing, and I highly doubt that will change, but if you want a nice change of pace from the typical Avengers or X-men titles, give it a shot. It convinced me to follow this motley crew after the end of this story arc to see where they go.


By: Josh Loe
Posted by The Hammond Comics Blog at 1:42 PM