The Strange Talent of Luther Strode 1-5 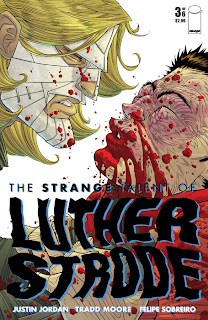 Luther Strode is all about every comic nerd's revenge fantasy. Talk about a book that deals exclusively in escapism, this one has it all. This below average specimen of a high school student gets the girl, develops super strength, pummels bullies into a bloody pulp, and even manages to have an even nerdier sidekick. But The Strange Talent of Luther Strode isn't just about "a bit of the old ultraviolence", and the good guy getting the girl in the end. This book has some great perks located in the back. There are some amazing, well detailed pinups, and some great essays from Justin Jordan that include such gems as "Why I fucking hate Midichlorians". I'm sure most of us have thought that very same thing at some point during the dismal viewing of Episodes 1-3 that were released over the past decade plus. Star Wars, once the greatest science fiction franchise ever, has become nothing more than another shameless marketing tool. George Lucas even managed to ruin the original films with all of the extra CGI added scenes. When that long lipped alien did the cabaret song and dance routine during the Jabba scene in Return of the Jedi, I seriously wanted to kill myself. But his isn't a post about Star Wars, so let's get back to Luther Strode whose creators deserve to be the focus of their own review, for better or worse.

The past week I managed to get a few days off from my 9 to 5 and spent one of them reading throwback 80's Marvel titles. I know what you are thinking, but I did not always hate Marvel books. Their Flagship characters were never my favorites, but I always appreciated a well written, bloody Punisher romp, or a good Ghost Rider floppy. But mostly I find myself reading these books because they bring back so many memories. The pages are gritty to the touch, and nothing smells like an old comic. Nothing. They are also filled with some great old advertisements. My favorites were always the pages filled with hundreds of little boxes selling x-ray specs, blackhead removers, and the Atlas strength ads that promised you would be disposing of pesky bullies and impressing the ladies in no time flat. How does this tie in to Luther Strode? Well, the premise of this series is that Luther Strode responds to one of these ads promising him Herculean strength and the book he receives actually delivers some results. This object of scorn and ridicule now has the ability to tear almost anyone apart with his bare hands. And Luther Strode is also peppered with some funny jokes written in the vein that can only be found in an adult themed comic. This is not a serious book by any means, but it doesn't try to be either. And sometimes that's OK,even welcomed.

The violence is gratuitous. The jokes are lame, yet hilarious. The characters and title reek of cliche, but the book and the series are well above average unless an awful concluding sixth issues awaits. It is really the little things that make this one worth reading. The pin-ups are great. There is some good artwork in there that is really special. And the essays at the end of each issue are hilarious. Not only is The Strange Talent of Luther Strode a throwback to our youth, but it adds a lot of the little details that made books of that era so special. This is no masterpiece, but a lot of fun and worth the $3.50 x 6. I saw a lot of back issues at my local comic shop. Don't wait for the trades. Support local business. Go out and get you some today.

By: William R. Davis Jr.
Posted by The Hammond Comics Blog at 4:26 PM