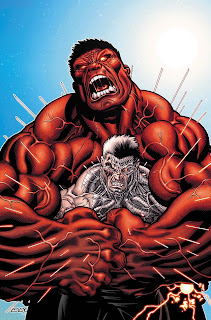 I listened to a conversation recently between a couple comic book intellectual type fan boys and they all agreed Jeph Loeb should not be writing on this series and for some obvious reasons. It doesn’t matter who you are except maybe the Beyonder and a few other “all powerful” super beings. You are not taking down Earth’s mightiest heroes like a bunch of washed up B-listers. It’s like watching Hulk Hogan “fighting” all those every other Saturday “I need a quick couple bucks” type of guys, that they brought in when Jake the Snake was too hopped up on crack. He literally took out the Falcon, Captain America, and Iron Man like a bunch of amateurs. Oh, and in this issue Cabel takes down the Rulk. The Red Hulk attacks you with a boat anchor and you walk away, you are now the baddest mother on the planet. That’s right Samuel L. Jackson, hand over wallet. It’s possible that the Rulk now has the T.O. virus which is most definitely interesting. Imagine a big metal Hulk tank bashing everyone.
So, I don’t know what to think about Loeb. Maybe this was too big a story for him to handle. I can’t say that I haven’t been entertained, because I have. It’s not really bad writing, it’s just that you can’t fool real fan boys into believing the Red Hulk wouldn’t just give Cable a quick dick punch and be done with it. He might have survived the anchor, but sure as shit isn’t walking away from a dick punch from the Rulk. Isn’t happening.
Now Wolverine, my boy Spidey, a one-eyed X-men, and Hope are on the scene for the fourth and final issue. Setting up Avengers vs. X-men: I think so. Good thing Loeb has nothing to do with that one. I’m foaming at the mouth to read this one. Can’t wait till April. Also, in March, the X-terminated comes out which I am really excited about. The art in the X-terminated short in Marvel point one was amazing, and it’s why I am going to buy it. And truthfully, I can’t say I’m not excited about the fourth and last X-Sanction because I am. Whether it’s within the realm of possibility in the eyes of the fan base, one thing you have to admit is that it’s fun to read and the art has been fantastic too. However, much of the die-hards disagree. They are still buying it anyway so that has to say something.


“Did you ever think that to the nuts inside, the peanut is like their whole universe? I mean they could fall in love and never be together because the shell separates them. So close, but their cruel prison, the shell, keeps them apart. It’s so sad how they must hate their cruel master, the shell, uncaring despoiler...of legume romance! And then one day, they are free! And it’s like, let’s dance, you hot salty nut!" - Deadpool

By: Cody Miller
Posted by The Hammond Comics Blog at 4:27 PM