From the 50 Cent Pile 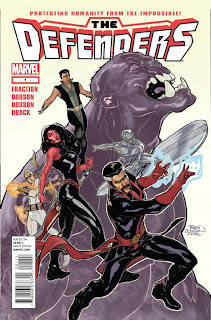 Next to the register at my comic book store are stacks and stacks of impulse buys. At 50 cents a comic, more times than not, I will pick a book up if it seems even remotely interesting. The Defenders #1 was next to the register last Wednesday. This is not a book I would normally get. I'm admittedly not a huge Marvel fan. I only follow a few superhero titles and all of them are DC. But for some reason I have always had a fascination with Dr. Strange, The Silver Surfer, and Prince Namor (well I guess it's King Namor now, but you get what I'm saying). I have one volume each of the black and white Marvel Essentials books. I never found any of the books that compelling, but I'm planning on giving them a re-read at some point.
I had no clue what The Defenders were all about, but with Doc Strange, Silver Surfer, and Namor on the cover, I could get into their new book at 50 cents and come out ahead even if it was complete garbage.

My feelings on the book are mixed. There was some surprisingly good dialogue, most notably that of Dr. Strange. There is even a Jersey Shore moment where the Doc laments the student that he took home for a one night stand. It appears that The Comics Code is now a thing of the past. Namor is another surprisingly good character. Funny, witty, and chock full of overall badassery, he makes and not breaks this one. Silver Surfer appears later in the book as an almost omniscient and God-like character. Drawn as some sort of cubist Picasso rip off, he is my third least favorite character in this occultist version of The Avengers. I'm not even going to get into The Iron Fist and She Hulk. They are good for a couple cheap one liners, but do their best to ruin the book at every turn.

The plot was pretty "eh". It seems that Hulk's rage and hate has manifested itself in the form of a new "Black Hulk". Yawn, it seems that Marvel will have a Hulk of every color by the year 2017. How the mighty fall. But even though this is not a perfect contribution to world of superheroes, The Defenders is a lot of fun. I was surprised as anyone when I gave the comic book store a call and told them to add it to my pull list. It made me want to read more in the end. That is saying something. I have a lot of deep seeded prejudices against Marvel as a whole, and they managed to keep on for at least a few more issues. Hopefully they keep She Hulk and The Iron Fist out of this book as much as possible and improve the plot a bit in the future. Getting some different artists on the book wouldn't hurt either. The Defenders could go in some pretty interesting directions in the future. But for now, it has potential and some bright spots. Prognosis: Good enough for now.

By: William R. Davis Jr.
Posted by The Hammond Comics Blog at 7:53 PM