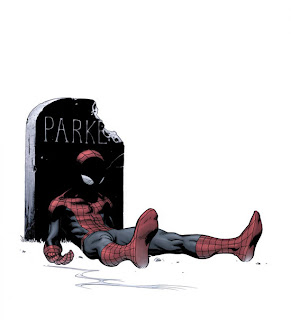 I found myself with not too much to get excited about this week. After multiple trips to the comic book store, and over double my normal comic budget, the only stories that I came to treasure were the standards on my pull list. But there have been articles written about these books in the past. And this whole thing isn't really about writing love letters to our favorite books week after week. The reality of comicdom is simple: There are a lot more bad books out there than good ones. The superhero genre is the victim of the same regurgitated, recycled stories of our youth. Most fanboys could care less. Bruce Wayne is Batman. Clark Kent is Superman. The big books never really change all that much. Once in a generation someone like Frank Miller comes along and redefines a book like Batman, but nothing like that has happened since I was about eight years old. The adult genre suffers in the same way. The books about sex, have sex crammed into every panel. The violent ones: blood, gore, and exploding human bodies on every page. It has gotten to the point where most don't have much of a story anymore, but that doesn't even matter. Fanboys are the most loyal and obsessive consumers in the world. Marvel fans buy Marvel books. DC fans buy DC books. Adult and independent genre fans buy books from Image, Dark Horse, Vertigo, and Dynamite. These companies keep churning out literary chum week after week because people will buy them regardless of their quality, and it is all our fault.

These books are not cheap either. I spend more at my local comic book shop per month than on cable television with HBO and DVR. At $3.00 to $4.50 a piece, we deserve better. DC did some nice things with the reboot, but Batman and Swamp Thing are now broken and awful. Scott Snyder needs to be replaced on both, and although I have been collecting Batman books since the age of eight, I had to stop buying both titles. As a collector, my obsessive compulsive collector instincts constantly come to the surface. I try to avoid eye contact with my Batman section and not think about the issues not being bagged and bored and neatly cataloged away. Those feelings eventually pass, and we must let them because the only way we are going to send a message to these companies is to stop buying their sub-par products. Without our dollars they have to stop settling for less and actually put a product on the shelves that is worth reading.

What are we hoarders? They play these reality shows over and over again starring people awkwardly navigating their way through rooms full of mountains of useless crap. How many plastic forks and crusty old sweatpants does one crazy old lady actually need? Most reasonable people watch shows like these for sheer shock value, but this leads me to an undeniable truth about the people we see at comic shops and conventions. The truth is that the majority of comic fans are no better. As fans, we need to be less concerned about collecting every single issue, and more concerned about the quality of our collection. If you are anything like me, you probably already own more comics than you can ever re-read in a lifetime anyway. Hoarding away crappy comics keeps the status quo alive and thriving.

Comics have started to gain real credibility in the literary world in the last 15 years. One of the best kept secrets in entertainment is starting to become more well known. Scurrilous academics now have an opinion on Maus, American Splendor, and Persepolis. I hate academics, and for years they tore to shreds something that I loved because of negative stereotypes. Now it is trendy to view comics as an art form in literary circles, and you better believe that if you find yourself at a party where one of these worthless human beings is sipping a glass of chardonnay and the subject of comics in literature comes up in conversation, that tool of a pretentious prick will act like an authority on the subject even though they have only read five "graphic novels" in their entire lives. It is easy for real fans to sniff out these posers within 3 minutes. The conversation never gets past Moore, Spiegelman, or Craig Thompson's Blankets. How many conversations have you had like that in your lifetime? Too many I would wager.

Comics are an art form. More than that, they are one of the few pure American art forms left after the death of jazz. If we continue to happily lap up mediocrity in comics, we dilute and cheapen a form of entertainment with endless potential. When comics are good, they're really good! Any real fan knows that simple fact. The superhero genre can be better. The adult and independent genres can both be better. It is time to keep our wallets closed in the face of these cheap hacks and worthless academics that are trying to kill the very thing that we love.

This started out as a review of a couple new monthlies that I ended up being very disappointed about in the end. What started as a standard post, turned into a necessary rant (for my own sanity anyway). But I hated the fact that I felt obligated to write about the very books that I have grown to despise in every sense, not because they were horrible, but more because they were uninspiring, cheap rip-offs that I have already read numerous times in different incantations. I would tear them both to shreds with my words, but I do more service to the integrity of comics by not even mentioning their names here. Refuse to buy inferior comics. Demand something better. They're already infesting the shelves of our favorite stores like locusts, and they will stay there until consumers start making better choices about how to spend their money. Be part of the solution.

By: William R. Davis Jr.
Posted by The Hammond Comics Blog at 5:03 PM