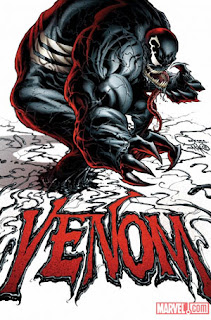 The newest incarnation of the character Venom is a far cry from his humble beginning. You see the symbiote, known as Venom, started off as nothing more than an advanced costume that Spider-Man picked up on Battle World way back in the Secret Wars. An interesting little known fact is that Marvel didn’t create the suit. A fan wrote in to Marvel about a new black suit created by Mr. Fantastic for a writing contest entry.
So yeah, Spider-Man brought it back to Earth and after discovering its true nature (I’m sure you’ve seen Spider-Man 3) rejects the suit, and Eddie Brock, under the steady hand of Todd McFarlane, becomes the iconic Marvel Villain Venom.
He was an instant hit and issue after issue of the Spider-Man books he caused major issues for the Web Head. Brock ends up with cancer and decides to sell the symbiote for ungodly amounts of cash and donates it to charity. A son of a mob boss buys it. The symbiote ends up finding this jerk “unworthy” and ends up causing this guy’s death. In mid-jump between buildings, the symbiote separates from him and he goes splat.
The super villain Scorpion was the next to run with it for a while. The symbiote ended up being removed from him by big brother (He’s always watching).
Now we arrive at the present and current “wearer” Flash Thompson. The government gives the symbiote to Flash shortly after his legs were blown off in the line of duty. He becomes sort of a government agent at first, then not so much. He still battles the symbiote for control. So that’s why he seems like a hero then ten minutes later he’s trying to eat someone’s brain.
Now back to this latest issue. Venom has been blackmailed by the Crime-Master and forced to go with Jack O’Lantern to Vegas to recover a mysterious shipment. The shipment turns out to be “Toxin” undeniably the most powerful of all the symbiotes. Not to mention Venom’s “grandson.” So naturally, Venom try’s to destroy it and a battle between Venom and Jack ensues. I loved it when after having just crashed his flying “broom stick” he says “I just took that one in the pumpkin seeds.” For fear of the crime-master hurting his family, Venom lets Jack escape with the true Toxin symbiote and then he proceeds to get smashed on Whiskey with alley bums.
The issue ended the road trip arc and the next story arc involves the Avengers sending out the Red Hulk to beat down Venom…..so that sounds promising.
All and all, I really enjoyed the writing. It was like the art and writing had a sort of sinister darkness about it. As I’ve said before, I’m partial to darker art with heavy shadows and gloom about it. And the cover, forget about it…..it’s amazing. Jack O’Lantern and Venom locked in a battle of deadly melee. What’s not to like?


By: Cody Miller
Posted by The Hammond Comics Blog at 6:45 PM