Reinventing The Man of Steel 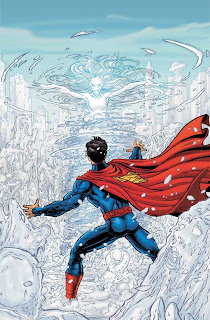 Arguably the most significant and iconic comic book hero ever created is Superman. Action Comics number one (first appearance of Superman) is the most recognizable, valuable, and collectible comic in history. The words "faster than a speeding bullet" are well know to even the lowliest pop culture Philistines. The Superman logo is even more popular than the comic itself, and has found it's way to almost every corner of the world. Merchandise ranging anywhere from stickers, hats, and tattoos generate millions of dollars in sales each year; and the majority of these transactions are conducted by people who have not ever read a single issue of the comic book. It is the idea of Superman that people really love. Superman has become a symbol of strength, invincibility, and uncompromising morality in an immoral world, the embodiment of our ideal selves.

Rebranding an icon of this magnitude is the biggest thing to happen to the world of comics in years, maybe ever. Before the reboot, Superman had become so stagnant that the book itself was almost unreadable. Grounded as a storyline had immense potential in my opinion. Contemplating the idea of a world without Superman is not a new concept, but an introspective Superman searching for his adopted nation's identity on a walk across America could have been a great read. In the end, it might have been the worst Superman story arc ever. Kingdom Come did a much better job. Red Son, while not exactly in the same vein, gave the reader a glimpse of a world where Superman was now a citizen of communist Russia, and in my opinion is hands down the greatest "what if" series ever written. There were some big shoes to fill in the Superman mythos, but the man tapped to do the job had already penned another fan favorite: Crisis on Infinite Earths.

It would take an almost Herculean effort to erase Grounded from memory. There was so much backlash from the fans, but it could be argued now that the bar was set so low last year that almost anything would be an improvement. The reality is somewhere in-between. I probably read issue one five or six times. At first, I did not like anything about the book. The style was wrong. The story was wrong, but I did take into account that no one would be harder to please then myself, a lifelong fan with a chip on my shoulder. Action Comics set the bar very high; Superman did not have the immediate appeal of Action, but I believe it is a lasting and relevant title. What I expected was the same present with different wrapping paper, but George Perez had a much more ambitious view. Thematically the book is very strong. An improving and growing Metropolis is evolving but being built on the backs of the poor. The presence of Superman is helping develop Metropolis and keeping the city safe, but at what point is the price of progress too high? With every battle, human life is lost. Some citizens are starting to think that Superman is more of a magnet for trouble then a deterrent, and at this point in the current arc they would all be correct.

Superman is a solid book. Action Comics has been a more compelling read to date, but seeing an adolescent superhero developing his powers has a lot of appeal. Action has more cheap thrills and guilty pleasures for fanboys, but Superman is a great book for completely different reasons. It is a dense, detail filled, well drawn, and well written superhero tale that is actually thought provoking. George Perez took a struggling title and made it socially relevant again after over a year of futility. The reboot has been kind to both Superman franchises, and both books have taken their rightful place as some of the best DC titles out right now. After a year of throwing rocks at the throne the man of steel is back and better than ever. All is right with the world.


By: William R. Davis Jr.
Posted by The Hammond Comics Blog at 4:34 PM