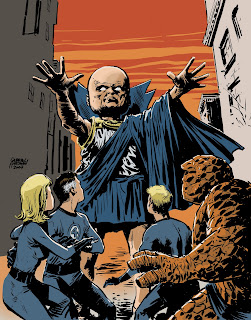 So this was one giant sized issue broken down into short stories. The stories were memories taken from the Watchers archives. Seeing as time has no meaning to the Watcher, they are glimpses into the past, present, and even possibilities that could be or that will never be. Each story has different writers and artists making this book an oddity worth looking into, but I will try and break it down a little bit.

The art in the first story is average at best. I found myself just pushing through these first pages to get to the next. Nova comes to warn the planet Birj and Terrax about something called the phoenix and the impending doom it’s bringing. Of course Terrax ignores Nova and he and the planet are wiped out. Is this foreshadowing for some new great apocalypse in the MU. No clue. I don’t really care.

So this story line is set in the future. Weapon X and his mutant minions have pushed the human race to the edge of extinction. The only thing standing in Weapon X’s way are the heroes of the X-force. Deadeye, Goodnight, Friend, Horror Show and the leader Prophet (William Stryker). Prophet is the only one who actually does anything in the story. He murders a mutant named Krakken and his wife, and that’s about it. The art is above average. I really enjoy darker art with deep shadows and De La Torre must agree. The story really accomplishes a lot with only a few pages. The uncanny X-Force 19.1 prelude to the Apocalypse #1 comes out in January. I’ll at least check out the first couple of issues.

This was my favorite story in the whole book. The artwork was decent and the writing was pretty good. I am sure you all remember the infamous Spider-Man clone saga. Kaine has returned. At the beginning he’s on the run from the Avengers. He comes across a bank robbery and battles with the idea of ignoring or stopping it. He stops the Robbery and instead of his old ways he decides to capture and not kill the bad guys. It seems after being given a second chance at life he chooses the path of the hero and tries to leave his darker ways behind him. Most people would just as soon forget about Kaine and Ben Riley but I have always been a fan of Kaine the first failed clone of Peter Parker that the Jackle created way back when. He has a totally new costume that I really like a lot. In January, Marvel releases Scarlet Spider #1. Ben Riley’s out and Kaine is in. It doesn’t come out for another month, but this little glimpse into Kaines world has it on my pull list. It’s strange, I am a life long Spidey fan but Ultimate Spider-Man and now Scarlet Spider are on my pull list but none of the 616 titles are, except Avenging Spider-Man. Times are strange.

This story is about two twins with super powers who were separated at birth. The boy named Dragonfire, as his name suggests, has the power to create and manipulate fire. The girl named Coldmoon has ice powers. They were separated at birth and held captive by Taiji Corp. They both escape and reunite. They join forces with the Avengers against Sed Taiji Corp. The art is not all that memorable, but I really like the story. So are Dragonfire and Coldmoon getting their own book? I have no idea and if Larroca’s doing the art, I don’t care.

I couldn’t really get into this one. I have never really been a fan of Dr. Strange. I only read the first couple pages and gave up. I got bored and skipped past his story. I am sure this is a lead into the new Defenders book. Blah blah blah….no thanks.

I know right? How many Avengers story lines do we need? This one’s different. The march towards Ultron starts in Avengers #19. In this short glimpse Hawkeye and Spider-Man are on the run from Ultrons robot warrior looking guys. The art is really eye catching. There are some really great backgrounds and the hero’s look more like real people then cartons and that is always a plus. Overall, a real Avengers fan is going to love this story. Spidey or not, I am going to stay away from the Avenger titles. I am a Bendis fan and I really liked the art, so I don’t know maybe there is something with this Ultron run.

By: Cody Miller
Posted by The Hammond Comics Blog at 5:18 PM