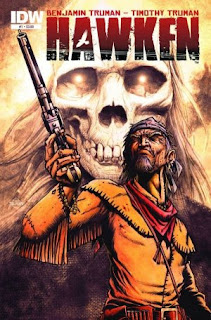 “Once there was an old man, he rode a blind mule on a trail called “El Camino de Muerte,” which means “the road of death.” During the course of his long life, the man had done many bad things. Many, many bad things. His name was Hawken.
The father and son duo of Benjamin and Timothy Truman really came up with something special with this series. The writing and Timothy Truman’s art are spot on. Somewhere between the cover and the instant he shoots a priest in the face, I fell in love with Hawken.
Hawken is an old gunslinger with a score to settle and by a score, I mean people to shoot in the face. Scalped, tortured, and left for dead, Kitchell Hawken is back for vengeance and the John Lee Gallis boys are about to have a very bad day.
Forget the horse with no name; how about a mule with no eyes? Why the Trumans have Hawken riding on a blind mule, I can’t quite say, but it’s a great element to throw in. The other unexpected story element is the fact that the ghosts of everyone Hawken has killed, literally follow him around. How interesting and unique is that?
I can’t get over how well these guys did in creating and developing a truly amazing character, with little more than a colt peacemaker and some well placed one-liners that would make Clint Eastwood envious. Buy Hawken, read Hawken, and he just might not shoot you in the face, but chances are he’d do it anyway!

By: Cody Miller
Posted by The Hammond Comics Blog at 4:52 PM