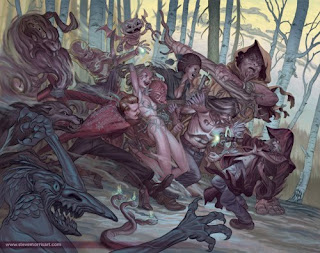 The Occultist is a great example of a mundane, re-hashed plot accompanied by average art. Issue one of this three part series is a shining example of why some people hate reading comic books. This wasn't a horrible book, and it wasn't great. Beyond a compelling opening sequence, there's just not a lot to love. If you are a huge Dr. Strange, Supernatural, or occult fan, this sub-par contribution to arcane themed tales could have some appeal. But if you are looking to read something new or innovative, put this one back on the shelf.

The Occultist is centered around a forgettable main character, so forgettable I cannot remember his name. The only thing about him that I do remember, is that in one panel he had a Dog Day Afternoon poster hanging above his bed. That only got him a few pity points in the end. Most of the time my attention was drawn more towards the co-cast of extremely attractive cartoon women peppered throughout the pages. Basically, the only thing that I can say for sure after reading issue one is that "The Occultist" is fucking dimes. Sex appeal has never been something that I have found to be important or even necessary in a comic book. You will not find any foil covered books starring women in bikinis holding chainsaws in my collection. Give me a great story and great art, not some escapist spank bank bullshit.

Issue one even has a letters page (you got me). One of the letters written by "The Comic Vault" sums up the above pretty perfectly: "Your main character Robert is all right, but nothing happened to build his character; the only thing I know is that he is upset that he has this mystic glove and he is having sex with a hot chick. He is doing pretty good for a hero so far." Be careful of the company you keep comic fans. Why anyone would want to print this specific letter is beyond comprehension. In all fairness, I'm sure there is a limited amount of fan mail coming in about a book that hasn't even been released yet. Sigh. These idiots will take us all down in end. Buy three issues of this crap and you will find yourself sitting front row at a midnight premiere of the new Michael Bay film The Occultist, starring Pamela Anderson, Carmen Elektra, and Paul Walker. They will probably even find a way to premiere the trailer during an intermission at a monster truck rally. I wouldn't wish any of that on my worst enemy, but hey, the world needs ditch diggers too.

By: William R. Davis Jr.
Posted by The Hammond Comics Blog at 4:35 PM