Baby June and her Newsboys 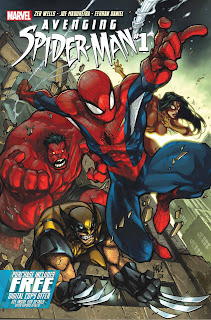 I’ve been collecting Spider-Man comics for more than half my life. Spider-Man is the reason why I read comic books. So naturally, when Marvel announced this new title, I was already on board. After reading through it a few times, I have come to the conclusion that this could prove to be a very exciting book. Just as the title implies, the content will be short story arcs with the Web Head and his newly acquired teammates from the Avengers. (And by the way, have you seen Spidey’s new white and black digs in the Avengers?) It’s the Web Head and the Red Hulk raising hell in the first issue, although, all of the Avengers make a brief appearance on the first couple pages. As a fan of the new Incredible Hulk, I’m in kind of a Hulk phase right now anyway. And I know next to nothing about the Red Hulk, except he’s General Thaddeus “Thunderbolt” Ross. He made some kind of deal with the evil Intelegencia and now has super-strength, energy absorption, and of course gamma radiation. Not to mention he’s F’in Huge and Red. He stayed true to Spider-Man and his playful personality. That’s a must for any true believer. I really like the art and color too. The Red Hulk really jumps off the pages with his contrasting red hue.

Look at it this way; you get Marvels most important character ever, equal parts Avengers and a dash of new villains. What’s not to love (except Bette Middler; I really can’t stand that lady, not that she has anything to do with this comic, just thought I’d throw that out there) A team up type of story line in the Spidey folder is just what it needed. With all the chaos in the DC and Marvel empires, the timing is perfect. Besides, I’ve already decided the only Avengers book that I am going to buy are the Avengers Asanction. There are just way too many to be able to afford and follow. Asanction heralds the return of the great and powerful OZ. Oh wait, I mean Cable. That’s right, Cable has returned to the land of the living, and sans X-men too I might add. Cable comes back or is sent back for one mission. He has exactly one day to destroy the Avengers. One mission. One day. It’s like that TV. show 24 it seems. Very interesting if you ask me. It’s sure to have some action packed pages. Also, in December, Marvel releases its new title, Villains, for hire. The bad win in this series. Sure to be something bright and shining in the sea of new titles. Cause sometimes, it’s just fun to be wicked.


By Cody Miller
Posted by The Hammond Comics Blog at 8:21 AM