Spaceman: One Giant Leap for Comickind 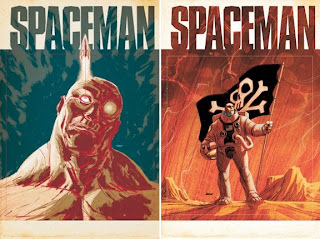 Virtual prostitution, psychedelic drug induced hallucinations, and a main character with a case of acute schizophrenia, all are within issue one of Spaceman, the new nine issue limited series by the creators of the acclaimed title 100 Bullets. And this is only issue one, excited yet? Generally I would wait until the series was concluded to write a review, but think of this more as an endorsement because Spaceman is a must read. Vertigo consistently continues to be the testicles of the DC family, and this book is as ballsy as they come.

Nothing out there reads like Spaceman, Azzarello even develops his own English dialect to break even more ground in terms of content. The new language can be a distraction at times, but it's addition does a great job of creating a setting vastly different from the Earth of today. The story takes place almost undoubtedly in the future, but the exact time and place are hard to determine among many other things. After reading issue one four times, I am left with more questions than I am answers. The setting, antagonist, protagonist, and plot are all up for interpretation and can take a completely different direction in the future. Orson, an ape-like lower class junk ship captain, lives in a lower class slum. He has drug induced dreams of being an astronaut, and these dream sequences appear to be a form of escapism because he deals with a lot of the same problems that most people deal with in life, essentially these hallucinations exist to him as another completely separate reality. He's alone, broke, and addicted to a lime green LSD like substance that transports him to a world where his actions matter; instead of being trapped in a reality where his existence is essentially moot. On Mars he is a man of substance, heroic, and skilled enough to stop an imminent greenhouse explosion on a "suicide mission". The two realities are intertwined throughout, and Orson genuinely believes that he was genetically created in a lab by human beings in order to withstand the rigors of space travel, most notably life on the planet Mars.

Issue one was focused more on developing a very complex character and creating a world that is unique in many ways. In some aspects though, the setting mirrors our own reality. The subplot in issue one is centered around a Hollywood power couple and their missing daughter. If it is possible, the popular media seems even more pervasive in Spaceman.
A short exchange between the police, publicist, and lawyer of the parents intimates that there may be some sort of cover up amiss, and issues 2-9 are sure to include Orson trying to unravel the mystery to the best of his drug addled ability. Issue one is the price of a shitty cheeseburger, one dollar. No excuses, buy Spaceman today.

By: William R. Davis Jr.
Posted by The Hammond Comics Blog at 4:18 PM