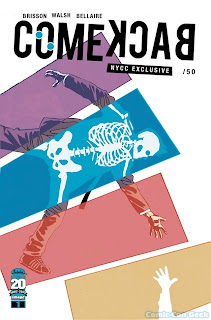 "At the best of times this time travel nonsense is a mindfuck."


Ed Brisson nailed this entire series in one line of dialogue right there. This is another sad example of a promising story getting bogged down in too many realities and overall confusion. Comeback tells the tale of a company called Reconnect that will go back in time and save the ones that you love from imminent death for five million dollars. Time travel is akin to terrorism in this reality, and all of Reconnect's customers have to go off the grid in order to keep the operation functioning. When a Reconnect grunt discovers that instead of leading new lives, the clientele is being killed, he decides to drop a dime on his employer and leave the business for good.

Issues one and two started out promising. Michael Walsh does a nice job with the art. It's not some of the best noir stuff I've seen on a page, but the use of light and dark does give the book a unique style that works well for the series. The plot ran straight off the rails in issue three, and no artist could save this series from the fuckery within. The characters are completely throw away. Not only did I have a hard time remembering their names, they didn't add a single thing to the story whatsoever. They were pretty much the comic book equivalent of Jason Statham, generic action heroes going through the motions on every page. Reconnect was in one ear and out the other after the series wrapped up. The best part about it was the preview for the new Ted McKeever book, Miniature Jesus, that was at the end of issue five. That one definitely looks like the shizz and will be mine come April.

I haven't been too kind to Comeback, but if you like action films that are light on character development this one could have a home in your collection. When it comes to my action films, I always need a Popeye Doyle in there somewhere to keep me engaged. Suffice it to say, I am not the audience for this book at all. Action is my least favorite genre.

The rent is too damn high.

Image is definitely at the forefront of what is happening in the industry, but even the best of companies churn out mindless drivel from time to time. Reconnect was pedestrian, average, and completely troped out. Take the money that you were going to spend on these five books and buy Chew 32, Saga 11, Superior Spider-Man 6, Conan the Barbarian 14, and the new issue of Jennifer Blood instead.
Posted by The Hammond Comics Blog at 6:47 AM