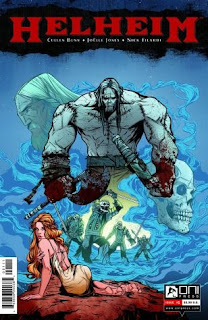 This issue quite literally opens up running: a group of men are actually running from some crazy looking bastards and their dogs. By men I mean Vikings and by crazy looking bastards I mean crazy looking bastards. Actually I don’t recall these “wild men” having been named but I do remember the Viking chaps slaughtering them and I remember not long after they had been dead, their skeletons rip right out of the bodies stand up and start hacking away at theVikings again. This time they are given a name…..Night Creatures.

This is when the unexpected happens…..Rikard our hero is killed about half way through this tasty gem of a book. I have never seen this done in comics. I wonder how that sales pitch went? … And then somewhere in the first issue I’ll separate the main characters head form his shoulders. I found Helheim’s first issue to be quite awesome. It wasn’t just another Viking or Conanesque story with a different twist. It wasn’t Beowolf. It wasn’t the 13th Warrior. It was quite gothic. It was a Viking era Frankenstein tale…..Did I forget to mention that? After Rikard is beheaded by the skeleton warrior his chicky brings him back as Frank on roids.

If you picked up this book because you’re a fan of Bunn’s the Damned or The Six Gun you won’t be disappointed. His writing is spot on as per usual. The dialogue is short and sweet, but also perfect. When one is dealing with the brutes of the North less talk more cleaving is optimal. I can’t complain about the writing I really can’t. The art however is where it’s at. In true Viking fashion the fight scenes are both beautiful and gory all at the same time. Joelle Jones; look and design of the characters are all well-crafted and Nick Flardis’ colors blow me away.

If you hate violence and badassery in your comics then you might want to skip this one but fanboys looking for a unique comic with bad ass artwork and Vikings then Hilheim is here to deliver heaping piles of awesome.

Posted by The Hammond Comics Blog at 4:39 AM